It feels like the ghosts of high concepts from the ’90s are gaining redemption. Virtual reality, once considered a bad joke, is potentially one launch away from being featured in a consumer product.

You know what else I saw in the ’90s that’s making a reappearance? Eye tracking and mind control. Like virtual reality, these concepts flopped around from one side hall to another at multiple Electronic Entertainment Expos, always failing to deliver on what they promised.

It was during a conversation at the recent Game Developers Conference that eye tracking and mind control came back to haunt me. I was being pitched to check out a demo for Stillalive Studios’ Son of Nor, releasing March 31 on PC. The game supports the Oculus Rift VR headset, the Tobii EyeX Tracker, and the Emotiv EPOC mind-reading device.

Fifteen years ago, this would’ve garnered a not-this-shit-again eye roll. Yet, if virtual reality can mature to its current state, maybe eye tracking and mind control have made strides as well. Above: Let’s tear up the joint.

Son of Nor is a third-person action role-playing game where the main character is a member of a special faction of gifted humans called, well, the Sons of Nor (although girls are invited as well). Members are born with special telekinetic powers, which have been passed down by an ancient goddess named Nor. Some benefits of being a descendent of Nor include manipulating objects with the mind and wielding a combination of elements (fire, wind, and essence).

Having a group of super beings capable of using their minds to roast others can become helpful whenever humanity runs into trouble. It’s funny I brought that up, actually, because guess what? Humanity is in trouble.

An ancient enemy known as the Sarahul (lizardmen), have started wiping out human settlements on an alien planet. It’s up to the Sons of Nor to stop the senseless slaughter with their bag of deadly psychokinetic parlor tricks.

Interactions — including puzzle solving and combat — require manipulating surrounding objects with special powers. For instance, I can pick up a Sarahul from 20 feet away, lock him in a psychic grip, and roast him to death over an open campfire.

I can also manipulate the sands of a beach or desert to act as an elevator, lifting me up to a high platform. If I see a boulder and a campfire, I can psychically snag the rock, light it on fire, and launch a flaming projectile into a group of lizardmen.

Although Son of Nor is one of the first titles to support the Tobii EyeX Tracker and Emotiv EPOC mind reader, the game doesn’t have to use either of these peripherals. My first playthrough of the demo was with just a mouse and keyboard on a standard laptop — mouse to look around, “WASD” keys to walk, right mouse button to do a telekinetic grab, and left mouse to fire off an object. Going off of the default controls, Son of Nor has its moments. The thing is, I sensed the game is supposed to take advantage of the eye tracker and mind control device. After about 15 minutes, I stopped playing the demo and spun my chair around to face the developers and PR reps who had been watching my progress.”This is nice, but where does the eye-tracking come in,” I asked.

Julian Mautner, lead developer on the Son of Nor project, pulled out what looked like a standard motion-sensor bar and placed it between the keyboard and the screen of the laptop. Small red lights began to emanate from the bar as we started calibrating the hardware to scan my eyes.

After being prompted to follow a dot on the screen for a few seconds, the unit claimed to have a lock on where my eyes were looking. Mautner relaunched Son of Nor.

I was still using the mouse and keyboard controls to move the onscreen character around and to activate abilities. My eyes scanned the virtual horizon and located a boulder to the right of the monitor’s frame. I made my eyes lock onto the object, and I right-clicked to activate the telekinetic grab. The boulder flew directly to my character.

I then looked to the far left and clicked the left mouse button, commanding the character to shoot the boulder off. The giant rock flew in the exact direction my eyes were looking with an eerie amount of accuracy. 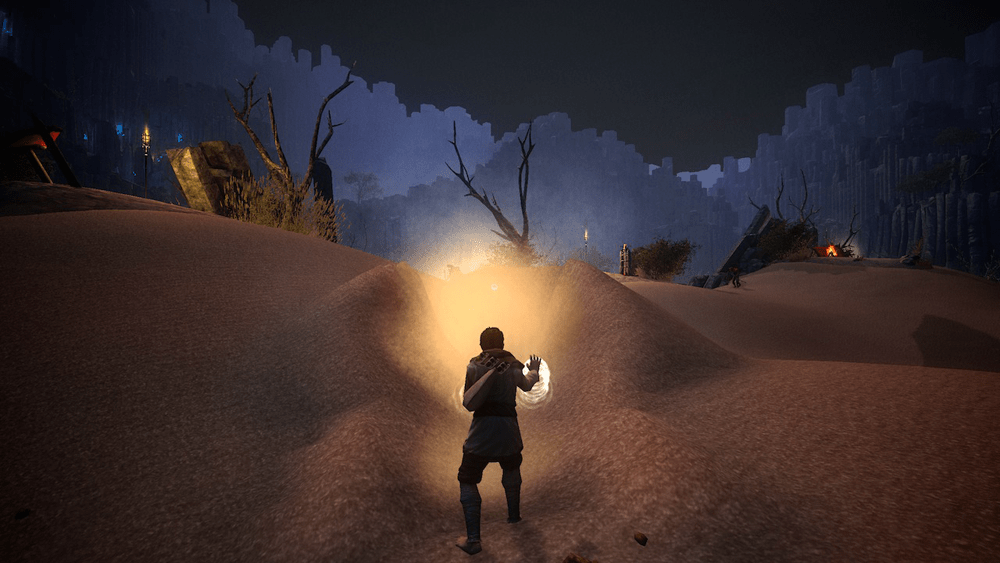 Above: If I can see you, I can probably hurt you.

I tried to trick the device by cocking my head while staring at a branch off in the distance and activating the psychic grab. It did not fail to recognize and pull the stick toward me.

The only place I experienced a hiccup was when I faced a cluster of objects that were overlapping each other. If I stared at an object peeking behind another, the game or the device would prioritize the object closest to me instead.

Still, aiming with my eyes is a cool gimmick, and when it works, it’s accurate. It took a little bit for my mind to adjust since decades of first-person shooters have honed my motor skills to aim the viewpoint directly at what I want to grab or shoot, but the more I kept reminding myself that I had a set of perfectly good eyes working for me, it became easier to adjust.

After roasting a couple dozen lizardmen over a campfire with my eyes, I felt confident I was ready for the next step. Killing things with my brain.