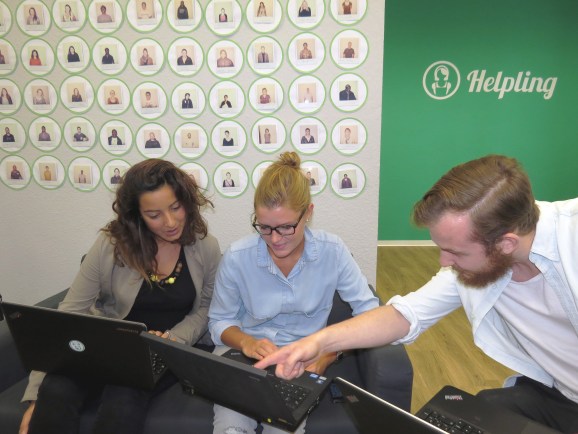 If you’re not reaching, engaging, and monetizing customers on mobile, you’re likely losing them to someone else. Register now for the 8th annual MobileBeat, July 13-14, where the best and brightest will be exploring the latest strategies and tactics in the mobile space.

Germany’s Helping confirmed today it has acquired U.K.-based Hassle.com to create a home-cleaning giant in one of tech’s most fiercely competitive spaces.

The companies did not disclose the value of the deal. Tech.eu reported the size as a $ 35.5 million all-stock deal. However, a source familiar with the deal told VentureBeat the acquisition was made using a mix of stock and cash.

The acquisition brings together to companies that have raised almost $ 70 million in venture capital over the past two years. The new company will now be operating in 14 countries, including nine in Europe, and on five continents.

Benedikt Franke, co-founder of Helpling, said the two rivals had grown closer in recent months as they edged toward competing in each other’s territories. Ultimately, they decided to merge rather than pour tons of resources into trying to battle each other.

“The best way to go about this and to leverage this potential was to join forces,” he said.

Both companies recruit and vet home cleaners, and then provide a platform for clients to connect and hire them on-demand. This online home cleaning concept has been immensely hot in the past two years, but more recently it’s also been consolidating.

Another big competitor in this space is U.S.-based Handy, which has reportedly been in talks to acquire another home cleaning rival, Homejoy. Respectively, the companies have raised more than $ 60 million and almost $ 40 million, though Handy provides more services on its platform than just cleaning.

Homejoy seems to have fallen on hard times of late, not long after raising $ 38 million. The company has experienced some executive turnover. And Helpling took a hard look at buying Homejoy before passing.

Alex Depledge, cofounder of Hassle.com, will join the Helpling executive team and oversee Hassle operations in the U.K. and Ireland, where the company will continue to operate under the Hassle name.

Depledge, who has been a fierce advocate for the European startup scene, said that while it was tempting to go it alone and try to raise more money, the deal was just too logical for Hassle to pass up. In recent months, Depledge said she was comfortable that the Helpling founders shared “the same values and the same vision.”

“I just felt like we would fast-forward two years,” she said. “And instead of growing through all these turf wars, we could avoid that and really leverage our strengths.”

The two companies, however, arrived at this deal after traveling very different paths.

Hassle, founded in 2012, was one of the pioneers of the home-cleaning market but was also the smaller of the two companies. It had a scrappy feel, building with minimal resources until finally raising $ 6 million last year in a round led by Accel Partners.

The company primarily focuses on the U.K. and Ireland. Helpling had been facing a costly battle if it had wanted to move to enter the lucrative London market.

Helpling, in contrast to Hassle, came out of the Rocket Internet startup factory in Berlin. From the germ of an idea in January 2014, the company was already operating in 140 cities within nine months.

This year alone, Helpling has raised an additional $ 52 million in venture capital over two rounds, making it a daunting competitor. In addition to Europe, Helpling has launched in Canada, Australia, Brazil.

Both executives said the immediate focus would be on growing with their current territories. Any decision on moving into new regions, including the U.S., would likely be far down the road. But if and when that happens, it sounds like the new Helpling will be ready to take the fight to any U.S. competitors.

Depledge said the new entity showed that European startups are now thinking more ambitiously, and are ready to compete with U.S. rivals who are typically better funded.

“This is European collaboration at its best,” she said. “Usually, we wait around to be picked up by the Americans. Now, we’re positioning ourselves as a force to be reckoned with. This is the kind of entity, the European ‘super startup,’ we’ve been talking about creating. Now we’re making this happen, and we should be really proud of this.”