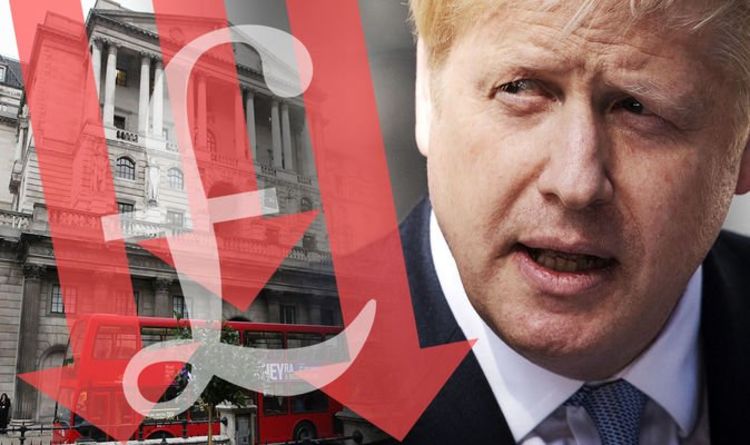 Brexit is looming ever close and with Prime Minister Boris Johnson at the helm, it seems Britain could be faced with no deal. No one knows exactly what will happen after Britain leaves the European Union but the prospect of no deal has heightened fears in some parts of the economic sector. Bank of England governor Mark Carney has predicted the value of the pound would fall in response to what he described as a “real economic shock” – claiming products such as petrol and food would become more expensive if the UK leaves the EU without an agreement. And now new data from the Office for National Statistics (ONS) released on Friday showed the UK economy shrank by 0.2 percent in the second quarter – the first time since 2012 that this has happened, raising fears of a recession.

Nigel Green, Founder and chief executive of deVere Group, told Express.co.uk: “Sterling has taken another pounding after the UK’s economy was shown to have contracted in the second quarter, adding to the economic woes on top of no-deal Brexit concerns.

“The pound has fallen more than 4.5 per cent against the dollar in July and August over fears Boris Johnson’s government is pushing the country towards a no-deal Brexit –which most economists think would be economically damaging.

“Should the UK leave with no-deal, the pound is likely to remain weak for several years until the country and the EU readjusts.”

Mr Green added: “Depressingly, Britain appears to be stumbling towards an economic abyss.

“UK and global investors will be becoming increasingly nervous of this deteriorating situation.”

“They will, inevitably and quite sensibly be looking to grow and safeguard their wealth by moving assets overseas through various established international financial solutions.

“The pace of this trend is likely to increase over the next few months as the geopolitical issues intensify.”

A poll of more than 740 clients carried out by deVere Group fond that six out of 10 investors are now actively seeking to move assets out of Britain.

And Mr Green claims: “There is a legitimate and growing sense amongst those who were polled that in order to build and safeguard wealth, assets should be moved outside of the UK.

“Investors are seeing a perfect storm brewing: the UK’s slowing economy, weak global economic growth, the pound at a 10 year low, the increasing possibility of an interest rate cut and the risk of a no-deal Brexit pushing the UK into a recession.

“The poll underscores that the UK is no longer an attractive place for investors. The UK is now at a critical point – perhaps the most critical since the global crash.

“Many are simply not prepared to risk their wealth and are considering international options.”

Prime Minister Boris Johnson is preparing for a battle in parliament come September, as his cross-party opponents are divided on the best way to prevent a no-deal Brexit.

However, unlike Mr Green not everyone is afraid of Brexit – and some finance experts think Britain could thrive without EU conditions.

In 2018 book, “Clean Brexit: Why Leaving the EU still makes sense”, economists Liam Halligan and Gerard Lyons explain the reasons why the City of London will instead soar.

The pair highlighted made the example of Solvency II, the EU directive aimed at the insurance industry, which turned out to be “absolutely dreadful, expensive and burdensome”.

Instead of being a positive directive, Solvency II constrained the insurance industry’s ability to expand, particularly in Asia and the USA.

They wrote: “The City is in a very favourable position post-Brexit, despite the current barrage of media stories to the contrary.

“The last thing it should be wanting is to burden itself with expensive and constraining EU rules and regulations.

“In contrast to the UK government, the EU does not appear to want to encourage financial services.”

So what does this mean for the economy after October 31? Britain is yet to find out.