Alibaba announced its earnings today, and the Chinese ecommerce giant got a nice lift from its cloud business, which grew 66 percent to more than $ 1.1 billion, or a run rate surpassing $ 4 billion.

It’s not exactly on par with Amazon, which reported cloud revenue of $ 8.381 billion last quarter, more than double Alibaba’s yearly run rate, but it’s been a steady rise for the company, which really began taking the cloud seriously as a side business in 2015.

At that time, Alibaba Cloud’s president Simon Hu boasted to Reuters that his company would overtake Amazon in four years. It is not even close to doing that, but it has done well to get to over a billion a quarter in just four years.

In fact, in its most recent data for the Asia-Pacific region, Synergy Research, a firm that closely tracks the public cloud market found that Amazon was still number one overall in the region. Alibaba was first in China, but fourth in the region outside of China with the market’s Big 3 — Amazon, Microsoft and Google — coming in ahead of it. These numbers were based on Q1 data before today’s numbers were known, but they provide a sense of where the market is in the region. 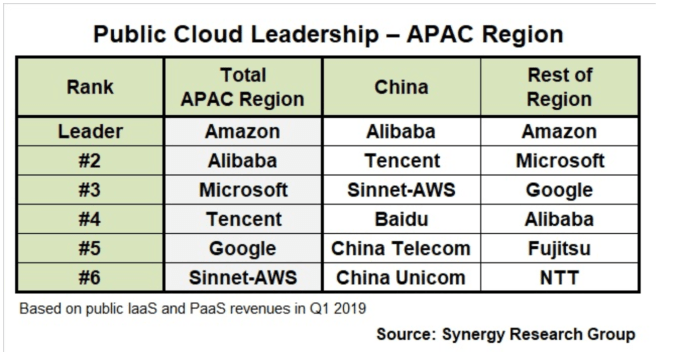 The company was busy last quarter adding over 300 new products and features in the period ending June 30th (and reported today). That included changes and updates to core cloud
offerings, security, data intelligence and AI applications, according to the company.

While the cloud business still isn’t a serious threat to the industry’s Big Three, especially outside its core Asia-Pacific market, it’s still growing steadily and accounted for almost 7 percent of Alibaba’s total of $ 16.74 billion in revenue for the quarter — and that’s not bad at all.

Ambitious Alibaba takes aim at the kings of cloud computing