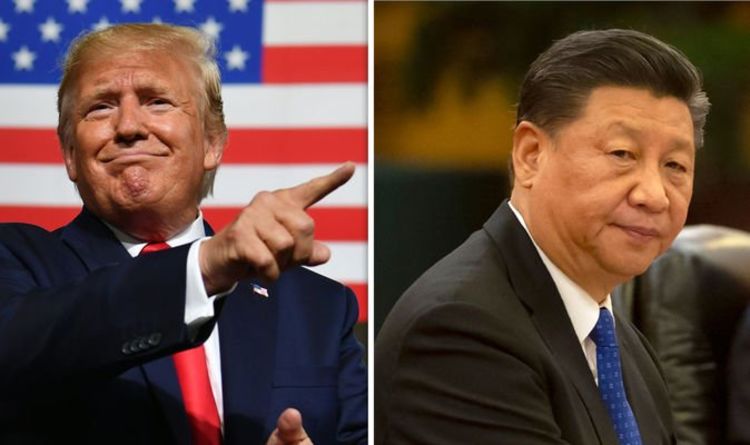 Under Chinese President Xi Jinping’s nine-dash line, Beijing has looked to increase its control over the region. In order to halt that strategy, Trump has sanctioned patrols to pass through the waters and has now agreed a new warplane deal with Taiwan. The deal for the F-16 fighter jet is likely to increase tensions between Beijing and Washington as the two continue their trade war.

In light of the current crisis in Hong Kong, the deal has been praised by US Republican Senator, Marco Rubio.

Mr Rubio insisted that the fighter jet deal was an essential step “in support of Taiwan’s self-defence efforts”.

The Senator added: “As the Chinese government and Communist Party seeks to extend its authoritarian reach in the region, it is critical that the United States continue to enhance our strategic relationship with our democratic partner Taiwan through regular and consistent support.”

Ms Chunying stated that the US would “bear all the consequences” in a devastating response.

She concluded: “China urges the US to fully recognise the highly sensitive and harmful nature of the relevant issue, abide by the one-China principle and the three China-US joint communiqués, refrain from selling F-16 fighter jets to Taiwan and stop arms sales to and military contact with Taiwan.

“Otherwise, the Chinese side will surely make strong reactions, and the US will have to bear all the consequences.”

The deal is the first of such a scale for fighter jets since 1992.

Texas Senator, Ted Cruz of Texas, also praised the President for the deal.

Mr Cruz stated: “With China building up its military to threaten us and our allies – and the People’s Liberation Army aiming thousands of missiles at Taiwan and deploying fighter aircraft along the Taiwan Strait – now more than ever it is critical that Taiwan has the support needed to defend itself.”

The announcement comes as the Philippines and China meet to discuss relations with the former becoming increasingly worried over Beijing aggression in its waters.