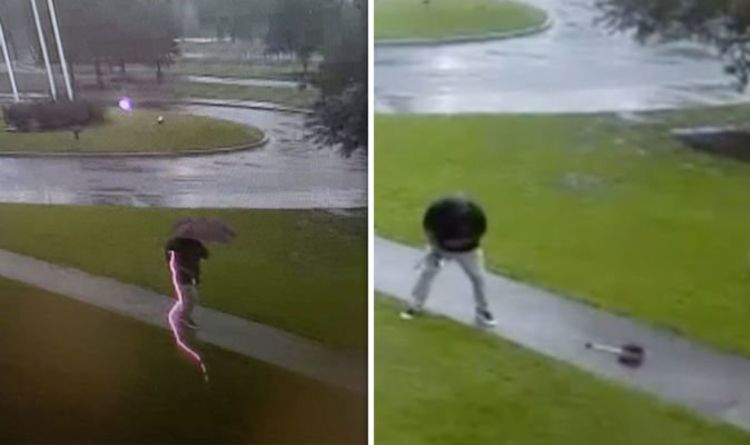 Close calls with lightning are often a hazard during a heavy downpour and thunderstorm and one South Carolina learnt this fact first hand. Camera Footage shows the stunning moment Romulus McNeil was just missed by a lightning bolt as he walked to his car during a thunderstorm in Horry County, South Carolina. On average a bolt of lightning, striking from cloud to ground, contains roughly one billion joules of energy and travels at an estimated 200,000 mph.

The video shows Mr McNeil walking down a path as a quick crack of lightning strikes inches from his body prompting him to fall over and drop his umbrella before quickly running away.

Lightning is extremely hot and a flash can heat the air around it to temperatures five times hotter than the sun’s surface.

About 2,000 people are killed worldwide by lightning each year with hundreds of more people surviving strikes.

However, those struck often suffer from a  variety of lasting symptoms, including memory loss, dizziness and numbness.

Mr McNeill told local news outlet WSOC that he felt a jolt when it happened.

JUST IN: ‘Prepare your family’ Peak of hurricane season to be worse this year

He said: “I saw a light and I tried to get up out of there like the Roadrunner.

“I don’t want that to happen to nobody else, it was crazy.

“I am super thankful to have been able to motor scoot out of there without major injuries.

Mr McNeill closed with a joke saying: “I’m looking around for dark clouds or for anything funny now.

Another agreed and added: “It took his body two steps before his brain got it!

“I wonder if he now has any special powers or a streak in his hair?”

Some social media users were more critical of Mr McNeil’s decision to walk with an umbrella during a thunderstorm and return to it after his close encounter.

Twitter user, Lady L wrote: “He has an umbrella no wonder he was almost struck by lightning.

“That metal and lightning does not mix, good to know he’s okay.”