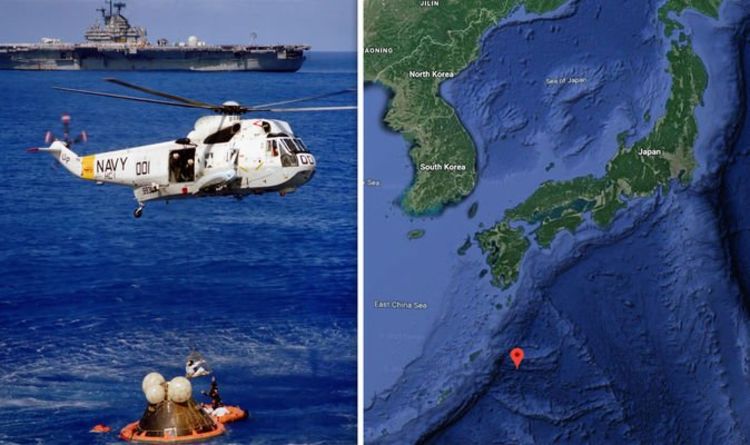 On December 5, 1965, just three years after the Cuban Missile Crisis pushed Cold War tensions to the limits, the US made a monumental mistake during a training exercise. A United States Navy Douglas A-4E Skyhawk attack aircraft fell off the side of aircraft carrier USS Ticonderoga while sailing through the Philippine Sea. The pilot, Lieutenant Douglas M Webster, the plane, and the B43 nuclear bomb on board all fell into the water, 68 miles from the coast of Kikai Island, Japan.

However, it was not until 1989 that the Pentagon admitted the loss of a one-megaton hydrogen bomb.

The revelation inspired a diplomatic inquiry from Japan, however, neither the weapon, or the pilot, was ever recovered.

The incident, the most serious involving nuclear weapons in the Navy’s history, showed that US warships carried atomic weapons into Japanese ports in violation of policy, according to researchers.

Japanese law banned ships carrying nuclear weapons from sailing in its territorial waters or calling on its ports following the terrible Hiroshima and Nagasaki incidents.

However, the US warship routinely docked in Japan.

William M. Arkin of the liberal Institute for Policy Studies claimed in 1989: “For 24 years, the US Navy has covered up the most politically sensitive accident that has ever taken place.

“The Navy kept the true details of this accident a secret not only because it demonstrates their disregard for the treaty stipulations of foreign governments but because of the questions it raises about nuclear weapons aboard ships in Vietnam.”

The event was highly sensitive, with Japan being the only country to ever be attacked with nuclear weapons at the end of World War 2.

On September 8, 1951, 49 nations drew a line under the devastating event and signed the Treaty of San Francisco – also known as the Treaty of Peace with Japan.

During the crash, three MK28-type hydrogen bombs headed for land in the small fishing village of Palomares in Almeria, Spain.

Worse still, the explosives in two of the weapons detonated on impact, contaminating the surrounding area of almost one square mile with plutonium.

The fourth sunk off the coast of Spain and was recovered three months later.