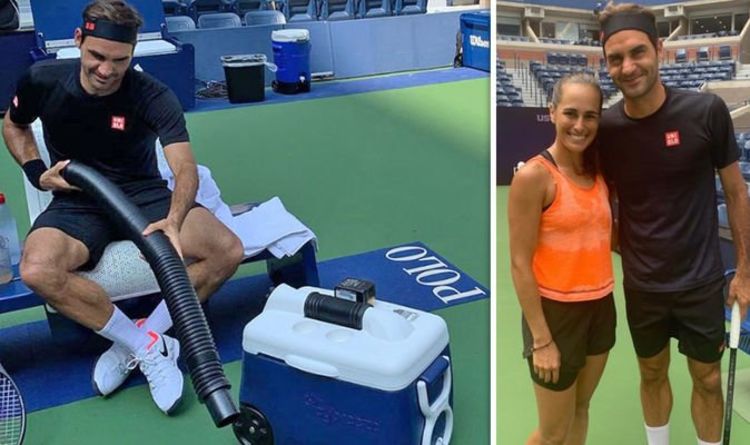 On Thursday, Federer was dumped out of Cincinnati after being beaten 6-3, 6-4 by Andrey Rublev in 62 minutes.

It was the quickest defeat Federer had suffered in 16 years and leaves him short of match practise ahead of the final Grand Slam of the year.

Federer’s last title in New York was back in 2008 and he will start the tournament as at least the third favourite behind Novak Djokovic and Rafael Nadal.

But seemingly in a bid to get acclimatised to the hot and humid conditions, which hampered him last year, Federer has arrived in the ‘Big Apple’ one week early.

The Swiss posed for a photo with 2016 Olympics gold medal winner Monica Puig while WTA star Rebecca Sramkova posted a video of the 38-year-old practising with Marton Fucsovics while his coach Severin Luthi watching on.

And Federer was back on court in the afternoon to play with Alexander Zverev, who has had a difficult year on and off the court.

Speaking after his loss to Rublev, Federer insisted he was still feeling good about his level.

“I mean, look, also very important for me is always to see that I’m injury-free and I’m feeling good,” he told reporters.

“Regardless of what the outcome of this week, I’m happy I came here, had good practice sessions.

“It’s trying to be there. So when these kind of results happen, I don’t know what you can do.

“You walk away from it and say, like, What’s the plan? I don’t know. I just walked off the court.

“I will speak to the team about it. I will have a few more days off now, I’m sure, before the US Open.

“I worked very hard coming into Cincinnati, you know, and sort of in that little season we had since Wimbledon, so I can maybe also utilise a couple of days off.

“I’m going to train, exactly what I need to do for the Open, and that’s it.

“It’s fairly simple, keep it simple, but I’ve got to work hard.”