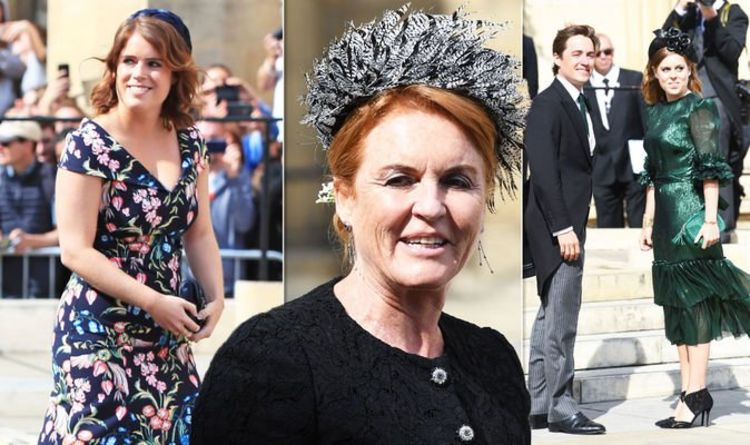 Sarah Ferguson was all smiles as she attended the wedding of internationally renowned pop singer Ellie Goulding today in York.

Ellie married her long time boyfriend Caspar, 27, who is said to have been introduced to the singer by Princess Eugenie, who married her husband Jack Brooksbank in October last year.

Fergie wore a black brocade coat dress with a black lace slip beneath.

The single-breasted coat had five silver buttons and shoulder pads.

On her feet the Duchess of York wore cream shoes with black lace and a pointed toe.

Princess Eugenie, on the other hand, wore a stunning figure hugging navy dress.

The gown has a floral print and fit and flare cut with a low v-neck and folded shoulders.

She matched the gown with a navy blue clutch back and grey heels.

She wore a bottle green shiny dress with frills on the skirt and the sleeves.

On her feet she wore black lace heels and opted for a black headband with large roses.

Beatrice held an emerald green clutch with a tassel.

It was no surprise to see royals at Ellie’s wedding, as she sang at the Duke and Duchess of Cambridge’s wedding.

Ellie has also been friends with Eugenie for some time and they went on holiday to Jordan in 2017.

She and Jack have also been on double dates with Ellie and her new boyfriend in the past.

There is much speculation Sarah Ferguson and Prince Andrew will remarry, in which case Fergie might invite the singer to her second wedding.

Sarah Ferguson: Five facts about the Duchess of York

Sarah is the second daughter of Major Ronald Ferguson and Susan Mary Wright.

Her parents divorced in 1974, with her mother going on to marry polo player Héctor Barrantes in 1975 and moving to Argentina. Sarah stayed in the UK with her father, who remarried in 1976 and went on to have three more children.

She wore an ivory-silk wedding gown designed by Lindka Cierarch which had a 17 foot train and 20 foot veil. As is tradition, Sarah wore a diamond tiara, and her wedding band was crafted from Welsh gold.

The couple spent their honeymoon abroad the real yacht Britannia off the coast of the Azores Islands.

However the couple remain on good terms, even living together in the Royal Lodge from 2008 until Sarah moved to a ski chalet in Switzerland they bought together in 2015.

Sarah has written children’s books for many years, her first being a series about Budgie The Helicopter in the early 90s.

She has also been the US spokeswoman for WeightWatchers after famously battling her weight over the years.

On top of commercial endeavours, the Duchess devotes plenty of time to charity, including Children in Crisis, which she founded in 1993.

She has over 200,000 followers across the platforms, and shares many insights in to her life.

Most of the Royal Family are not on social media, but are represented by Kensington Palace, Buckingham Palace, or Clarence House.

Sarah’s daughters, Beatrice and Eugenie, are the exception, with both joining their mother on social media.