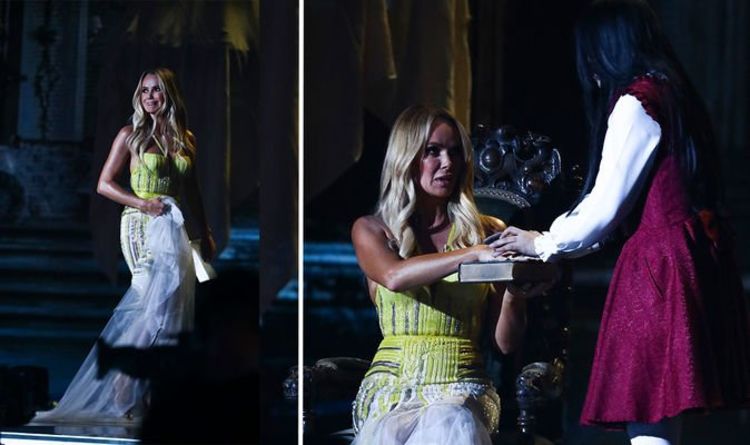 Britain’s Got Talent judge Amanda Holden, 48, oozed perfect princess vibes in a showstopper gown for the first episode of BGT: The Champions. The iconic ITV series rounded up a host of former winners and runners up to battle it out for a crown that tops them all, and the mum of two ensured her outfit didn’t not disappoint. The BGT favourite – known for her daring, don’t care dress sense – went for a sophisticated and elegant design tonight, in a lemon and cream gown which flowed to the floor. The garment featured a strappy, yellow, corset-style top, adorned with diamanté detailing.

The sequins flowed down into a chiffon cream skirt, giving a sexy flash of leg, and trailing behind the judge as she walked.

Amanda’s deep, golden sun tan perfectly complemented the bold colouring of the dress, while she wore her hair in equally stylish waves flowing down her shoulders.

She matched the classy look with barely-there make-up and a nude lip gloss.

She wore no accessory other than her dazzling wedding ring, letting the adornment of the dress take the spotlight.

Amanda previously tagged the designer of the dress on her Instagram page, this being BASIL SODA.

On the website, the brand details Lebanese founder Basil’s fashion mantra, and states it is creating designs to reflect a “woman’s strength and fragility simultaneously.”

It is unknown just how much Amanda’s dress cost, with prices available on request.

What’s clear is Amanda looked stunning on opening night and, when she gifted fans a teaser on her Instagram, they agreed.

One wrote: “Stunning hour glass figure,” as another agreed: “You always look stunning.”

Meanwhile, Britain’s Got Talent: The Champions will see both finalists and winners of the show battle it out to be crowned the ultimate champion.

A whole host of memorable acts have travelled to Wembley Arena for this year’s show including Paul Potts, George Sampson, Stavros Flatley and Twist and Pulse.

In total, BGT: The Champions will bring back winners from the last 13 series, competing to be crowned the ultimate champion.

It will also feature international acts from Got Talent shows in their respective countries.

It will air over six weeks, with two acts each week sent through to the final to compete for a cash prize and a trophy.

Head BGT judge Simon Cowell previously revealed: “My only concern and the downside of only having five shows before the final is that we’ve actually seen some amazing talent get sent home.

“The talent is off the charts! If we look at doing this again I’d like to do more heats and a couple of semi-finals before the final.”

Britain’s Got Talent: The Champions airs Saturday at 8pm on ITV.