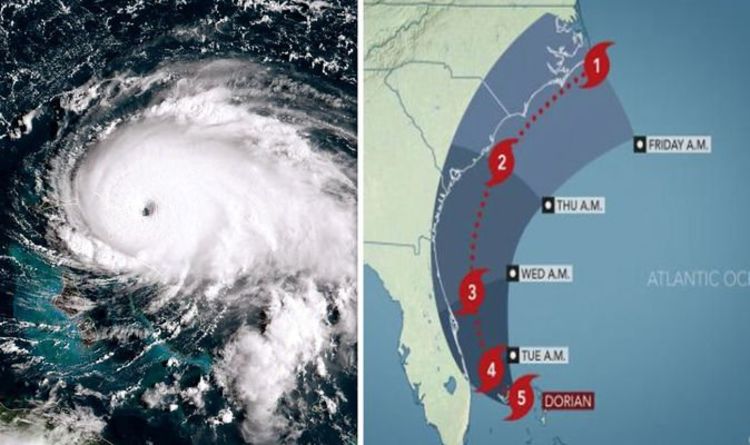 Dorian is currently moving west at speeds of just 1mph.

This means instead of speeding past, Dorian is lingering over regions for long periods of times, causing widespread destruction.

It also makes path forecasting more difficult to predict, with the NHC warning just a “slight deviation” from the official hurricane path forecast would bring the hurricane’s core directly over the east Florida coastline.

The hurricane currently has maximum sustained winds of 165mph, maintaining its classification as a Category 5 hurricane.

The NOAA advisory said: “A slow westward to west-northwestward motion is forecast during the next day or so, followed by a gradual turn toward the northwest and north.

“On this track, the core of extremely dangerous Hurricane Dorian will continue to pound Grand Bahama Island through much of today and tonight.

“The hurricane will move dangerously close to the Florida east coast tonight through Wednesday evening.”

The advisory added: “Life-threatening storm surges and dangerous hurricane-force winds are expected along portions of the Florida east coast through mid-week, and storm surge and hurricane warnings are in effect.

“Only a slight deviation to the left of the official forecast would bring the core to Dorian near or over the Florida east coast.

“Residents should listen to advice given by local emergency officials.”

Dorian is now the second-strongest Atlantic hurricane on record.

In the most recent advisory, some changes have been made to the current list of watches and warnings.

The government of the Bahamas has discontinued the Hurricane Warning for New Providence and Eleuthera.

They have also discontinued the Hurricane Watch for Andros Island in the northwestern Bahamas.

A number of other watches and warnings are still in place.