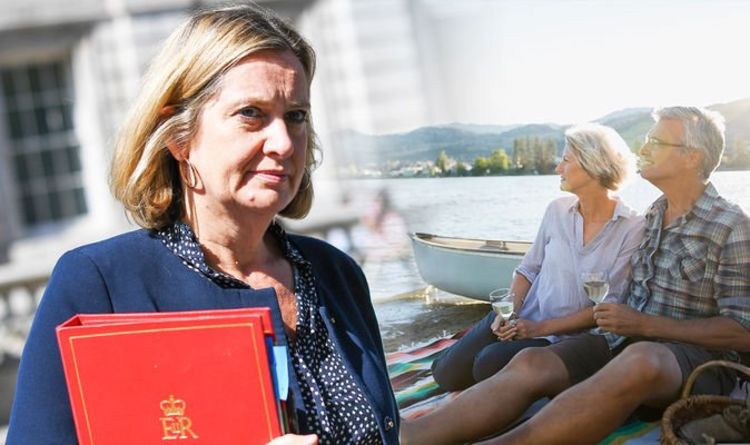 The state pension amount in the UK rises each year according to the triple-lock guarantee. This is by whatever is the highest of 2.5 per cent, the average wage growth, or by prices growth as measured by the Consumer Price Index (CPI). In some countries, UK pensioners living overseas may also see their state pension being uprated. However this increase does not apply to those who live full-time in certain countries, including Canada and New Zealand.

Yesterday, Work and Pensions Secretary Amber Rudd revealed that, in the event of a no-deal exit from the EU, nearly half-a-millions people living in the EU will continue to have their UK state pension increase each year.

The government has already committed to uprating in the EU for the year April 2019 to March 2020.

Now, this would continue up until March 2023, should the UK leave the EU without a deal next month.

Work and Pensions Secretary of State Amber Rudd said: “This government is working hard to prepare for leaving the EU on 31 October, whatever the circumstances.

“We will be fully ready for Brexit, and are leaving in a way that protects the interests of citizens here and in EU member states.

“This guarantee will provide reassurance to the hundreds of thousands of people living in the EU who receive a UK State Pension that their pensions will continue to rise significantly each year, however we leave.”

During this three-year period, the UK government has said it plans to negotiate a new arrangement with the EU, in order to ensure that uprating continues.

The announcement by the DWP yesterday said that some of those living abroad would soon receive text messages, informing them of the commitment.

It added that a new dedicated call centre team based in Newcastle has been established, allowing for those affected to seek answers to questions they may have.

However, some campaigners against the “frozen” state pension for some UK pensioners living overseas have reacted to the announcement with fury.

More than 500,000 UK pensioners live overseas in countries where the state pension does not rise each year, with the amount instead remaining at what it was when they left the UK.

The government website states which countries will see the state pension amount rise each year.

John Duffy, Chair of the International Consortium of British Pensioners said: “Whilst this is good news for UK state pensioners living across the EU, it is grossly disrespectful, unfair and a smack in the face to the 510,000 UK state pensioners resident in other parts in the world, many resident in Commonwealth countries which by definition have a particularly strong set of political, community and cultural ties with the UK.

“Many of these pensioners, like Anne [Puckridge, a WW2 veteran and campaigner who moved to Canada to live near her daughter], served the UK in its darkest times.

“Many others were public servants who helped build the UK and all paid their dues.

“In view of this announcement, we will be stepping up our campaign (www.endfrozenpensions.org) to end this terrible injustice.”

The DWP has previously told Express.co.uk: “It would cost taxpayers more than £3billion over five years to change course on an issue which has been clear and settled Government policy for 70 years. We have no plans to do so.”