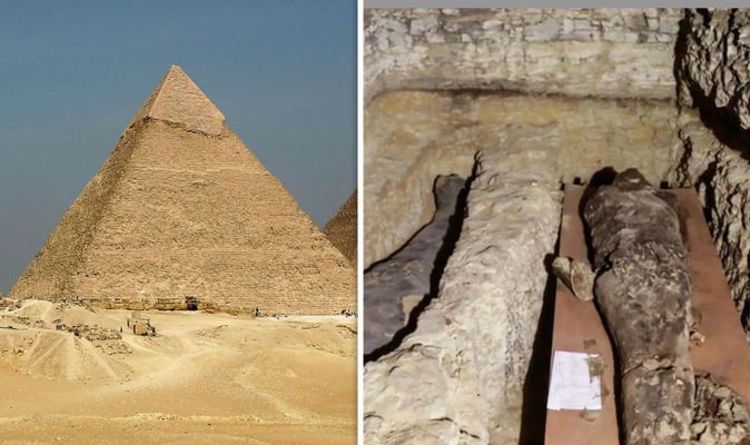 Saqqara is best known for being home to the Pyramid of Djoser, also known as the Step Pyramid. Built in the 27th century BC, during the Third Dynasty, the six-tiered structure is the earliest known attempt of what the ancient civilisation became best known for. However, below the constructions lies something more sinister.

Bettany Hughes revealed during her Channel 5 series “Egypt’s Great Treasures” how archaeologists are slowly uncovering a whole new city below the sand.

She said last month: “It’s an Egyptian City of the Dead.

“This is the incredible site of Saqqara and the whole place is an archaeological treasure trove.

“It’s dominated by that brilliant building, the Step Pyramid.

A subterranean world was discovered below Saqqara (Image: GETTY)

The Step Pyramid is located in Saqarra (Image: GETTY)

The whole place is an archaeological treasure trove

“It’s dominated by that brilliant building, the Step Pyramid.

“It might not look that impressive now but appearances are deceptive.

“The Step Pyramid is revolutionary, one of the earliest surviving monuments in all of Egypt and the world’s first-ever pyramid.”

Dr Hughes went on to reveal how millions of corpses have come out of the ground so far.

She added: “150 years older than the Sphinx and the famous Great Pyramid at Giza and it’s also the world’s first stone-cut building.

JUST IN: Disease X could kill millions and ‘we’re not prepared’ – Bill Gates

Bettany Hughes revealed all in her new series (Image: GETTY)

“But it’s not what’s above that ground that gets Saqarra onto our list of treasures, but what lies underneath my feet.

“Because, down here, there is a whole subterranean world.

“Not only that, but here there are thousands, possibly millions, of mummified bodies.

“This is the final resting place for 16 of Egypt’s earliest Pharaohs, but it was also a graveyard for queens and nobles and ordinary Egyptians for 3,000 years.”

Dr Hughes claimed that archaeologists are struggling to explain some of the finds.

She concluded: “So many mummies were buried here that Saqqara became Egypt’s biggest City of the Dead stretching over four square miles.

“All these mummies are remarkable enough, but archaeologists have also discovered something else.

“There aren’t just humans hidden here, but animals, too, in numbers that beggar belief.

“The necropolis was also home to cats, baboons, crocodiles, fish and some… well it’s anyone’s guess.”

During the same show, a 90-tonne coffin was blown open with dynamite.

In 1850, Auguste Mariette found the head of a sphinx sticking out of the shifting desert dunes, cleared the sand and followed the boulevard to the site.

After paving his way through a series of tunnels, Mr Mariette found one undisturbed tomb, and Dr Hughes took viewers to see it in all its glory earlier this month.

She said: “There are hundreds of metres of tunnels built to create something incredible.

“This is an underground palace and it’s no ordinary palace, this is a palace of the dead.

“What you are looking at here is the most enormous coffin.

“It’s made of solid granite and, together, this weighs around 90 tonnes.

“So you have to ask yourself, ‘what creature would be buried in something like this?’”

Dr Hughes went on to explain how researchers discovered something bizarre.

She added: “The archaeologists had never seen anything like this before and were desperate to find out what was hiding inside.

The team used dynamite to open it up and what they discovered inside was a massive mummified bull.

“They realised that the ancient Egyptians had built these huge coffins and this entire site has an underground cemetery for enormous, prized bulls.”

Watch Egypt’s Greatest Treasures with Bettany Hughes on My5