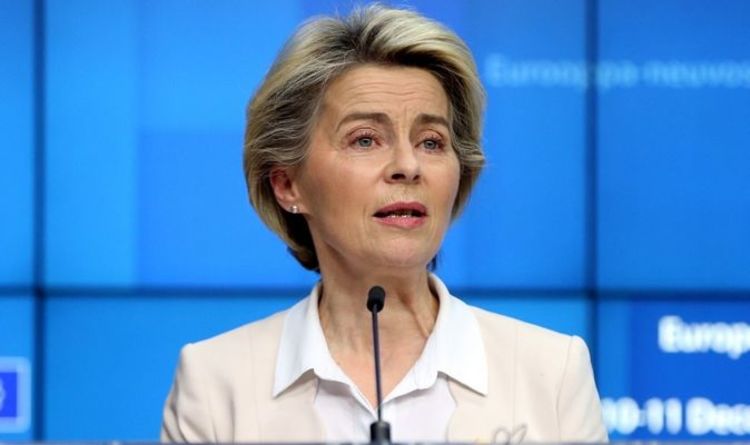 Speaking during an online event organised by the centre-right European People’s Party, which includes Ms Merkel’s Christian Democrats (CDU), the EU figurehead and German Chancellor threw her support behind changes to the health treaty. She said: “I am always open to treaty change if they make sense, and if they are not a goal in itself. In the area of health Europe needs more powers that may require treaty change.”

But the possibility of making major changes to the EU health treaty has been brutally mocked Italian MEP Marco Zanni.

Reacting to the news, he wrote on Twitter: “As the commission handled the vaccine game flawlessly, it seems like a brilliant idea to me!”

Vaccine procurement and rollout in the EU has stumbled from one disaster to the next, with several major nations once again shutting down as a third wave of Covid sweeps across the continent.

This has sparked fury among many of the 27 remaining EU member states, with Brussels becoming embroiled in a bitter war of words with vaccine maker AstraZeneca product and supply issues.

Ms Merkel defended the EU’s joint procurement of vaccines, insisting “it was correct that the EU purchased vaccines together” as purchasing separately would have triggered tensions in an open-border internal market.

The EU figurehead claimed several member states “would not have had a good chance of purchasing vaccines on their own”.

She added without the EU purchases there could have been a lot of competition between larger and smaller member states.

The German Chancellor said: “I think it is wrong to divide things into black and white, good or bad, success or failure.”

One diplomat involved in the talks taking place in Brussels on Wednesday said the plan was to force AstraZeneca to provide the number of doses set out in its EU contract.

A further two insiders told Politico that EU nations have until later this week to sign off on the move to sue jabs maker.

Ireland’s health minister Stephen Donnelly confirmed the Commission has initiated a legal case against AstraZeneca over its “complete failure” to meet delivery and contractual agreements for its vaccine.

He told parliament: “With regard to AstraZeneca, a legal case has been initiated by the (European) Commission and earlier this week I have joined Ireland as one of the parties to that legal case, specifically around AstraZeneca’s complete failure to meet its delivery and contractual agreements for April.”

The Commission also said earlier on Thursday it will not be taking up the option to buy 100 million additional doses of AstraZeneca’s vaccine, which is included in the current supply contract between the two sides.

A spokesman said the deadline to exercise that option had already expired and there were no plans to take it up.

In January, AstraZeneca sparked fury in the EU by warning it would not be able to supply the number of doses initially promised to member states.

But the end of last month, the vaccine maker had delivered just 30 million doses to EU countries – way below the 100 million jabs it had promised in its contract.

AstraZeneca’s contract with Brussels states it had promised to deliver a total of 300 million doses.

‘He’s turned into Le Pen!’ Macron forced into political shift as he fights ‘culture war’
Hamburg fire: Blaze erupts at Tiefstack Power Station – Alarm triggered as flames hit roof
How old is Bill Gates? How old is Melinda Gates?
AZ vaccine ‘only has a good reputation in the UK’ but is growing in 2 EU nations – poll
Jeff Bezos could ‘rocket’ price of Dogecoin tomorrow in 24-hour ‘surge’
LEAVE YOUR COMMENTS
Follow us on Facebook
Follow us on Twitter
Follow us on LinkedIn
Follow us on YouTube