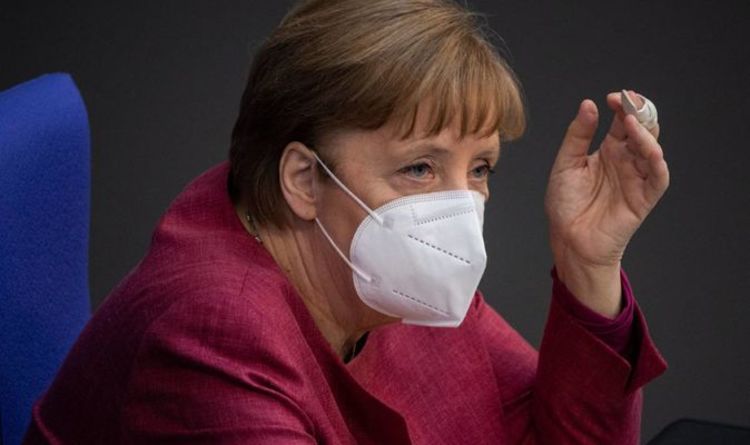 The EU country’s upper house of parliament approved a law today to give Chancellor Angela Merkel’s Government more powers to fight a third wave of the coronavirus. The new law enables the national government to impose curfews between 10pm and 5am, as well as limits on private gatherings, sport and shop openings.

Schools will close and return to online lessons if the virus incidence exceeds 165 cases per 100,000 residents.

The law still needs the signature of President Frank-Walter Steinmeier before it can come into force. The changes will apply initially until June 30.

Ms Merkel drew up the law after some of Germany’s 16 federal states refused to impose tough measures despite a surge in cases.

Manuela Schwesig, leader of the northern state of Mecklenburg-Vorpommern, said the amendment did not go far enough.

She told ZDF television: “This law has a serious design flaw.

“This law will not bring down infection figures.”

It comes afrer Germany reported a rise of 29,518 cases today.

This has brought the total to 3.21 million.

Around 80,893 people have died and doctors have warned that unless action is taken, intensive-care units may struggle to cope.

As a result, the emergency brake is expected to last until June 30.

Pension warning as Britons miss out on £76million – Sunak urged to act on auto-enrolment
Mortgage warning as 95 percent deal dubbed ‘political message’ – but hope left for savers
Ethereum hits new all-time high of $3,400 as price surges by 350% this year
Bill Gates and Melinda Gates to DIVORCE after 27 years of marriage
China’s Communist Party blasted over ‘inappropriate’ social media post about India crisis
LEAVE YOUR COMMENTS
Follow us on Facebook
Follow us on Twitter
Follow us on LinkedIn
Follow us on YouTube