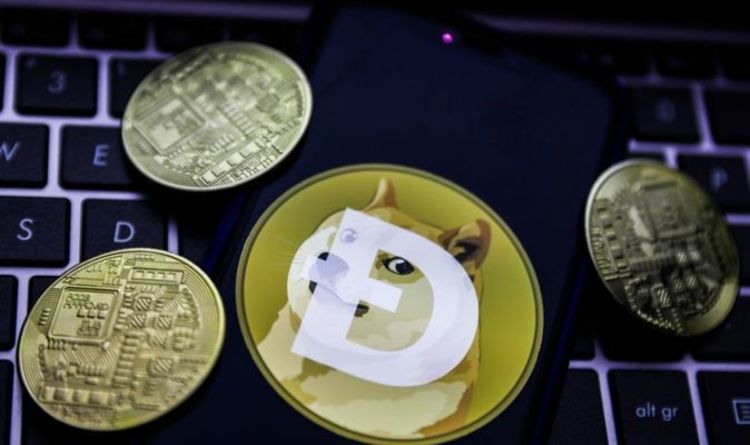 Dogecoin (DOGE) is continuing to shoot up in value, having jumped by a further three percent in the past 24 hours. In the past month, it has jumped by more than 479 percent, with the value of the coin now standing at £0.23 ($0.31), according to Coinbase. Many had assumed that the cryptocurrency, which was initially started as a joke based on the doge meme, would be a flash in the pan.

However, thanks to Elon Musk and his prolific tweeting – including a promise to put a “literal Dogecoin on the Moon – it has continued to rise.

Mr Musk’s most recent claim is that he is ‘The Dogefather’ – a nod to The Godfather trilogy – has once again caused a spike in value.

Now, experts believe that Dogecoin will continue to rise in value.

Sam Onigbanjo, founding partner of Capital Markets Academy, told Express.co.uk: “Dogecoin is rallying and a fall is not in near sight, precisely because the rise of the Dogecoin is based on ‘HYPE’ excitement and celebrity involvement.

“Elon Musk for example has been tweeting and trending #dogefather. This has heavily been retweeted by fellow investors.

“Summarising, the mood is highly expectant and the trend is bullish.

“Finally amongst the top 10 cryptocurrencies of the week, Dogecoin has experienced the second-highest growth at 7.93 percent for the week.”

Some forecasters believe Dogecoin could hit upwards of $1 by the middle of the decade which would mark a truly meteoric rise for the cryptocurrency.

As with any currency, there will be fluctuations in the price of Dogecoin.

However, as there is limitless Dogecoin, as opposed to something like Bitcoin, its value will fluctuate rapidly.

According to experts, the hype around the coin and its volatile nature makes it a smart coin to invest in, however, the chance to make serious money may have passed by.

When asked by Express.co.uk as to how much money one can make off Dogecoin, Paddy Osborn, Academic Dean at London Academy of Trading, said: “In simple terms… a lot!”

He continued: “That said, the best opportunity for massive profits may already be gone since Doge has risen 7000 percent since the end of January 2021.”

DON’T MISS
Dogecoin price: How many Dogecoin tokens are there? Will it rise?
HMRC to demand cryptocurrency holding data from taxpayers
George Soros’ Bitcoin backing: ‘Taking buyers from gold’

As with any investment, especially cryptocurrency, it is important to note that nothing is a certainty.

“Because it’s exchanged peer to peer without any tie to regulatory standards, there’s no pattern to the rise and fall of its value.

“You can’t predict changes or calculate returns like you can with growth stock mutual funds.

“There just isn’t enough data, or enough credibility, to create a long-term investing plan based in cryptocurrency.”

Are you eligible for extra state pension? Deferring claim for payment may increase amount
Halifax and HSBC are ending bank account switch offers this week – the deadlines to note
China vs Taiwan: Why Biden won’t defend Taiwan from growingly aggressive China
SafeMoon price: New cryptocurrency jumps 45% in just one day – how to buy SafeMoon tokens
VISA issues warning as Britons targeted by dangerous scams – ‘don’t be embarrassed’
LEAVE YOUR COMMENTS
Follow us on Facebook
Follow us on Twitter
Follow us on LinkedIn
Follow us on YouTube