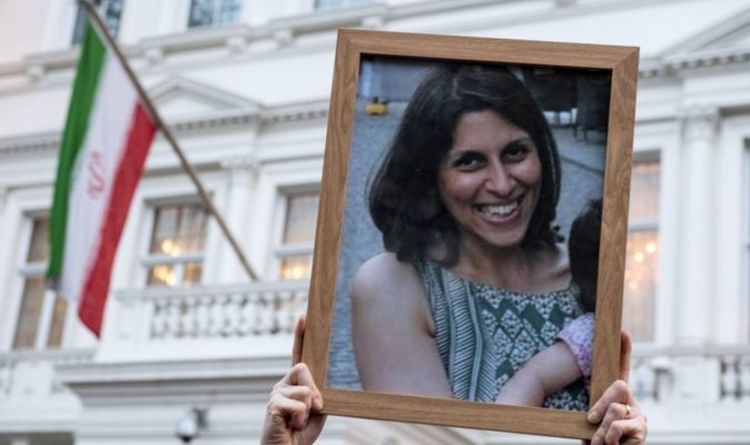 The £400 million fee is in relation to a debt over the non-delivery of tanks dating back to the 1970s.

It is thought the US has also agreed to release £5billion of frozen Iranian funds in order to sanction the prisoner swap.

Despite the reports, a UK Foreign Office spokesperson claimed the 40-year debt dispute is ongoing and is not yet resolved.

They said: “We continue to explore options to resolve this 40-year-old case and will not comment further as legal discussions are ongoing.”

An Iranian official said according to reports: “The release of Nazanin Zaghari-Ratcliffe in exchange for the UK’s payment of its £400m debt to Iran has also been finalised.”

Despite reports from Iranian state media, Ms Zaghari-Ratcliffe’s family claim to have not heard any news of her release.

A US State Department source also said today, the report of an agreement is not correct.

They said this afternoon: “Unfortunately that report is untrue.

“So far there is no agreement.”

Indeed, her local MP Tulip Siddiq, also revealed she had not heard any news of Ms  Zaghari-Ratcliffe’s impending release.

She said: “I am aware there are news reports circulating about the debt being paid to #FreeNazanin.

“I have spoken to her family and they have heard nothing confirming any of these rumours.

“It was however welcome to hear Dominic Raab refer to her torture this morning on Marr.

“I hope the Government is doing all it can to get the hostages home.”

Ms Zaghari-Ratcliffe, 42, has been held by the Iranian government since 2016.

She was released in March due to the pandemic and has been under house arrest ever since.

However, she was also sentenced to a further one-year sentence.

Today, Foreign Secretary Dominic Raab did not disagree when asked if she was being held hostage.

Speaking on the Andrew Marr show, he said: “It is clear that she is subjected to a cat-and-mouse game that the Iranians, or certainly part of the Iranian system, engage with and they try and use her for leverage on the UK.”

Universal Credit claimants to be eligible for reduced BT fibre broadband – full details
China’s Communist Party blasted over ‘inappropriate’ social media post about India crisis
Dogecoin price: Why is Dogecoin rising? Investment could ‘end in tears’
Egypt Great Pyramid construction unravelled after ‘fragments of evidence’ found
Savings ‘inertia’ forces billions into NS&I premium bonds – ‘we’ll pay a price for this’
LEAVE YOUR COMMENTS
Follow us on Facebook
Follow us on Twitter
Follow us on LinkedIn
Follow us on YouTube