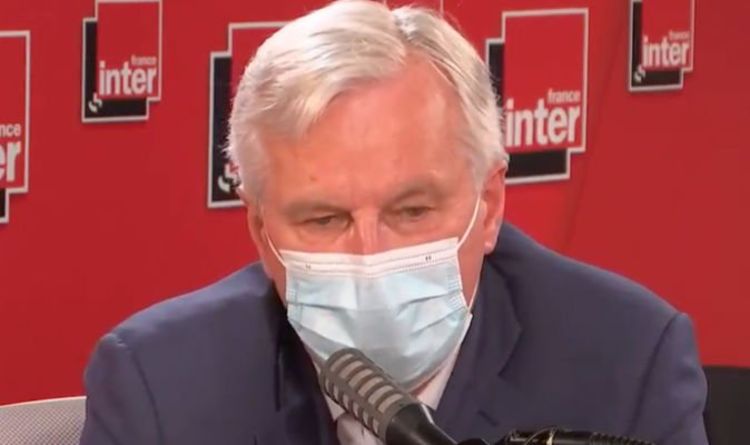 Michel Barnier hit out at the politics of Emmanuel Macron as he suggested the French President is “playing with fire” with his current policies. President Macron is expected to face off National Front leader Marine Le Pen in next year’s election as the right-wing politician closed the poll gap in recent weeks. Speaking to France Inter on Monday, Mr Barnier said: “I am simply saying, conscientiously and seriously, that we must not play with fire.

“This country, I feel it, I listen to it among the voters, needs clarity and needs a Republican right.”

Asked whether he was warning Mr Macron he was playing with fire, the former EU Brexit negotiator said: “I say that what he is trying, to dynamite or erase everything that exists between the current executive and the National Front, is running the risk of opening the way to something improbable and that I do not want to happen in my country.

“By wanting to erase everything that exists between the current executive and the RN, we are paving the way for something improbable, which is the election of Madame Le Pen, so we have to be careful.”

Mr Barnier said he will be taking on an active role in the run-up to the election in a bid to boost his party’s chances at victory.

JUST IN: Labour election crisis: Poll guru Curtice predicts Starmer will do even WORSE than Corbyn

He continued: “I will be an actor in this presidential debate.

“I think, at the moment, in my political family, The Republicans, there is a need to work together, to listen to each other, to respect each other.

“I want to participate in a collective game. This political family is rich in many talents, within it and right next to it, but we are failing to build a collective force.”

The comments about Mr Macron’s risk come after the French President confirmed an alliance between his La Republique En Marche! (LREM) and Mr Barnier’s Les Republicains (LR) for regional elections in the Provence-Alpes-Cote d’Azur region this June.

READ MORE: French vessels to be WELCOMED into Channel Waters after Macron threats

However, news of the alliance was met with some resistance on the Conservative side.

Christian Jacob, head of Les Republicains party, announced on Twitter on Sunday that his party was withdrawing its backing for Mr Muselier’s candidacy, criticising him and Castex for what he called political “manoeuvres”.

Les Republicains have yet to agree on a candidate for the presidential election next year, and some fear such local alliances with the LREM will further weaken their credibility as an alternative to Macron.

The first round of the regional elections will be held on June 20, with the second round due on June 27.

Putin’s poodle! Germany will not support NATO in any future wars with Russia – expert
Elon Musk’s fury with ‘knucklehead’ Bill Gates after shutting down ‘lovers’ claim
Ethereum hits new all-time high of $3,400 as price surges by 350% this year
‘Cuddly’ Joe Biden accused of creating greater divisions post-Trump in blistering analysis
Germany and France on collision course with EU over China investment deal
LEAVE YOUR COMMENTS
Follow us on Facebook
Follow us on Twitter
Follow us on LinkedIn
Follow us on YouTube