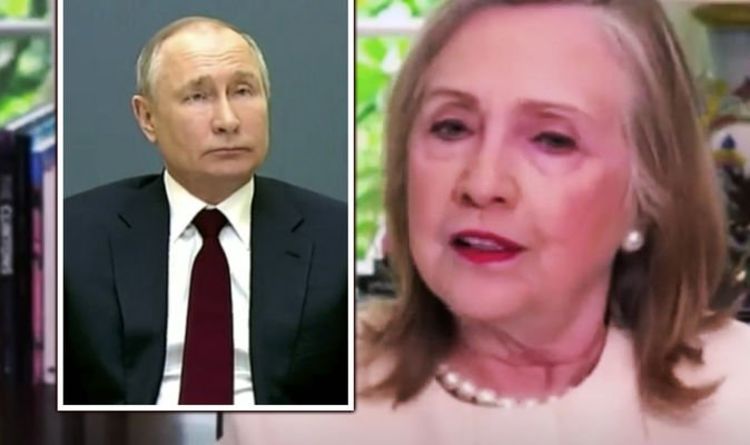 The former US presidential candidate was invited by former Tory party leader William Hague to address a Chatham House event on the future of liberal democracies. Hillary Clinton warned that Russia is the “primary adversary” when comes to interfering in elections. As well as accusing Russia of meddling in the 2016 American presidential election and again in 2002, Ms Clinton said there was “significant” evidence of Russian influence over the Brexit referendum.

The former US First Lady told the online event: “There was also significant evidence of Russian involvement if not influence or interference in Brexit.

“There is a lot of evidence of Russia suborning elected officials throughout Europe.

“Particularly in Eastern Europe, the Czech Republic has just thrown out a huge group of Russian intelligence agents.

“There is a collective effort by Russia to support political parties and candidates in Europe and elsewhere.”

JUST IN: ‘He sucks!’ US voters rate Joe Biden’s first 100 days as US President in brutal slapdown

“Who they believe will favour their interests.”

Her remarks came in response posed by Mr Hague who said: “One threat that has preoccupied me is foreign interference in democracies.”

He told Ms Clinton: “You have been on the receiving end of that perhaps more so than anyone else in the world.

Earlier on Ms Clinton had branded Russia as the ‘primary adversary’ when it came to election hacking.

President Biden told reporters after the announcement the sanctions were a “portionate” response to repeated attempted by Russia to undermine US democracy.

He said: “I was clear with President Putin that we could have gone further, but I chose not to do so.

“The United States is not looking to kick off a cycle of escalation and conflict with Russia.”

India faces third Covid wave that could ‘overrun health service, killing thousands’
HSBC urges Britons to ‘switch on summer’ with £125 offer and 1% interest rate
Savings: How to boost pots in a ‘handful of clicks’ as savers underestimate inflation risk
Bitcoin price crash: Cryptocurrency plummets 6% – Chinese crackdown on blockchain mines
France chaos as violent protests erupt on streets – police lash out in tear gas frenzy
LEAVE YOUR COMMENTS
Follow us on Facebook
Follow us on Twitter
Follow us on LinkedIn
Follow us on YouTube