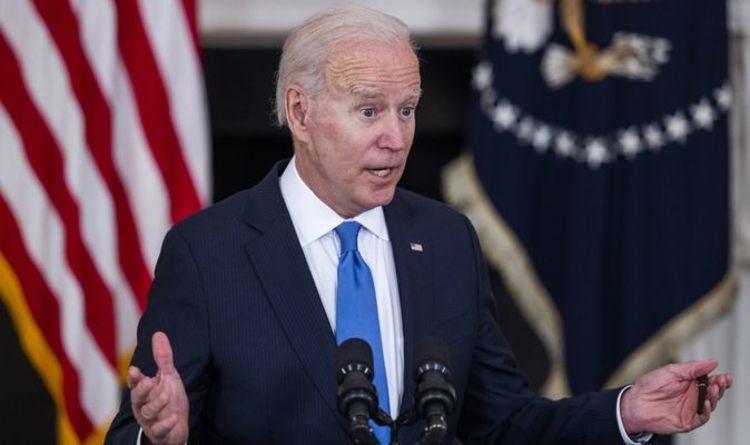 India and South Africa – both hit hard by coronavirus – proposed the plan to temporarily waiver patent protection on the vaccines. Now, 100 of the 164 World Trade Organisation (WTO) states are said to be in favour, with Joe Biden‘s name a huge victory in the fight to develop more vaccines at a quicker rate for less wealthy countries.

However, Big Pharma – such as AstraZeneca, Pfizer and Moderna – who have developed the vaccine in record times, are nervous about the move.

The first, Mr King said, is the financial implications.

He said: “There are very real concerns in the pharmaceutical industry should this happen because obviously patent protection is how the pharma companies claw back the immense cost of research and development.”

Mr King said the move “could blow a hole in their business models.”

Secondly, Mr King explained that Big Pharma companies could be worried the move might actually undermine their work in producing an effective vaccine quicker than ever before in history.

He said: “The other area of concern among the Big Pharma companies is that if you do start to have other companies around the world receiving patent information and starting to produce vaccines of their own, it potentially leads to a competition of resources.

“Bear in mind that only a very small number of manufacturers are producing Covid vaccines right now.

“They do tend to know what they’re doing, they can make efficient use of resources.

“Suddenly, if you have free for all then you’ve got competition for resources, you’ve potentially got scarce resources being wasted, and eventually actually hindering vaccine rollout right around the world.”

Big names in the industry agree, and the US decision was met with fury.

Brad Loncar, a biotech investor, said: “Intellectual property is the lifeblood of biotech, it’s like oxygen to our industry. If you take it away, you don’t have a biotech sector.”

However, pharmaceutical companies have said that patents aren’t the primary obstacle in global vaccine rollout, pointing the finger at trade barriers instead.

The head of the International Federation of Pharmaceutical Manufacturers and Associations, Thomas Cueni, told the BBC: “The bottlenecks right now are trade barriers, preventing companies from moving their goods from one country to another.

“It is shortages and scarcity in the supply chains, which need to be addressed.

“And it is also right now the disappointing unwillingness of rich countries to early share doses with the poor countries.

“None of this is addressed with the patent waiver.”

He added: “I’m deeply concerned if you hand this over and allow companies to try to get it done the right way, safe and high quality, you could compromise the quality and safety of vaccines which we see now and it would be disruptive.”

Homes for sale in Croatian town for just 11p – but you need to be under 40 to buy
State pension: Warning as ‘low’ sum leaves millions at risk of ‘inadequate’ income
Dogecoin price tracker: Crypto plummets 40% in a week – latest price
Afghan carnage as Taliban storm two cities after Biden withdrew troops- ‘Panic everywhere’
Joe Biden eviscerated as royal protocol breach undermines ‘statesman’ image
LEAVE YOUR COMMENTS
Follow us on Facebook
Follow us on Twitter
Follow us on LinkedIn
Follow us on YouTube