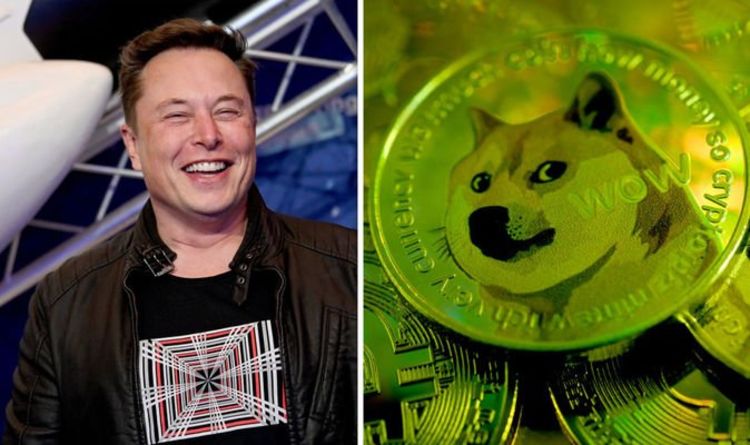 David Kimberley, analyst at Freetrade, said: “The latest surge in Dogecoin is a continuation of the greater fool theory trend we’ve seen playing out over the past couple of months.

“More people are aware of what’s going on and are looking to jump on the gravy train to make a quick buck.

“It’s very likely that Elon Musk pumping the coin tomorrow on prime-time US TV will only serve to compound things and push the price up.”

However, Mr Kimberly said there is every chance the coin could crash in the near future.

He has called on investors to hold their nerve.

Mr Kimberly continued: “But ultimately this remains a bit like a game of chicken.

“People will want to hold on for as long as possible before dumping what they have and cashing out.

“And you don’t want to be the one left asking ‘who left the Doge out?’ when that happens.”

In fact, My Bookie has given a 40.8 percent chance of reaching $1 by May 10 on the back of Mr Musk’s performance.

Mr Musk has already revealed he is more than likely to produce a sketch based around Dogecoin on SNL.

Comedian David Spade wrote on Twitter: “I wonder if @elonmusk on #snl will be a 90 minute infomercial for Doge coin. (Buying it as we speak).”

To which the SpaceX boss posted a series of laughing emojis.

Nationwide offers £1million prize draw – could you be in with a chance to win?
Joe Biden broke royal protocol ‘to throw US media a bone’ after difficult trip
State pension increase explained as Rishi Sunak asked whether pensions would rise by 8%
‘You may look back with relief’ Britons told to act amid inflation surge – but check terms
Joe Biden humiliated as Iran’s new president takes ‘tough position’ in US nuclear talks
LEAVE YOUR COMMENTS
Follow us on Facebook
Follow us on Twitter
Follow us on LinkedIn
Follow us on YouTube