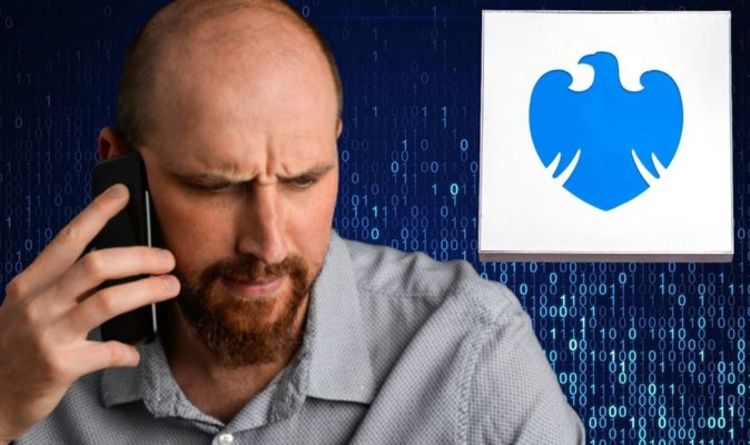 Barclays is used by millions of people right across the country, but cybercriminals are taking advantage of the name to scam unsuspecting victims. While text scams or “phishing” as it is known, are common, there have also been a rise in phone scams which use confidence trickery to target individuals. Recently, this is a technique deployed by scammers who have used the reputable name to wipe Britons’ bank accounts.

One person sounded the alarm on the scam, taking to social media to share their experience.

The individual stated she had received three separate mobile phone calls within the space of 40 minutes which claimed to be from Barclays.

Each call informed her of a supposed fraud alert, warning that someone had tried to take £600 from her account.

Barclays took the time to respond to the concerned message, confirming the correspondence as a scam.

As Britons are likely to be concerned about getting a call from out of the blue regarding the security of their account, it is more likely they will act to secure their cash.

However, this is simply a way for the cybercriminals posing as Barclays to easily harvest personal and sensitive data from individuals while supposedly rectifying the alleged fraud issue with their account.

The fraudsters are then able to make off with this information which they can use for their own unscrupulous purposes, leaving Britons out of pocket and devastated as a result.

The bank has said that if anyone is unsure as to whether a call is genuinely from Barclays or not, they should put the phone down.

Individuals can then ring Barclays using the number on the back of their card, or the phone number checker service on the official Barclays website.

The bank warns: “It only takes a convincing phone call, clever letter or persuasive sales patter to let fraudsters get hold of your cash.

“Fraudsters try to appear as legitimate as possible so it’s important to be vigilant and stay alert to anything suspicious.”

If anyone has unfortunately fallen for a scam, it is important to take action quickly on the matter.

This is also true for those who have accidentally handed over personal information or transferred money to a fraudster.

Britons can also contact Action Fraud in order to report scams they have come across.

The national cybercrime reporting service is designed to investigate the issue further in order to keep people safe from being targeted.

Finance professional turns ‘eye for fashion’ into side business
Macron forced into humiliating U-turn as France teams up with Japan in anti-China alliance
Beat pension age hike and access pot early – thanks to HMRC loophole
Council Tax Reduction warning as Britons could get up to 100% off bill – are you eligible?
Bitcoin price: Why is Bitcoin going up? Will Amazon accept BTC by 2022?
LEAVE YOUR COMMENTS
Follow us on Facebook
Follow us on Twitter
Follow us on LinkedIn
Follow us on YouTube