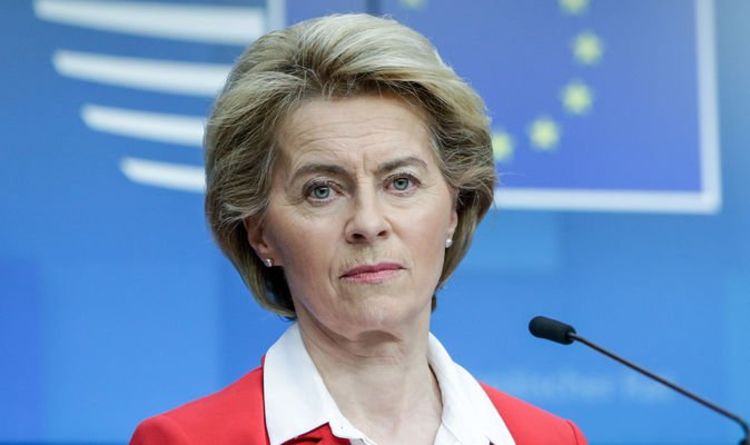 EU members have been struggling from sluggish vaccine rollouts, which remain significantly behind the UK and US. This has caused fury across the continent and pressure is growing for Brussels to provide answers.

There is also controversy over the EU’s plans for vaccine certificates to allow travel across the bloc.

These will show a person has either received the vaccine, recently recorded a negative test or recovered from a Covid infection.

Over 94,300 EU citizens have signed a petition asking Brussels for “vaccination transparency”, and posing a number of questions.

The campaign is being organised by Déjà vu, a campaign group led by a team of French lawyers.

The petition states: “The urgency of the fight against the coronavirus does not justify all the exemptions.

“The need to revive the economic machine must not expose the population to indeterminate side effects or uncertain benefits, which can only be verified through transparency of data.

“The temptation of the authorities to create a vaccination obligation, even through a vaccination passport, should not override public freedoms.

“Secrecy – allegedly business – and the opacity of decisions taken by distant authorities are sources of legitimate questions and necessary checks.”

“We demand that these elements all be made public.

“In the absence of the European Commission playing the game of transparency, we reserve the right to take collective legal action in order to obtain the required information.”

However the commission failed to order enough vaccines that received early approval.

As a result its rollout lagged significantly behind other advanced countries like the UK, US and Israel.

The EU suffered a fresh blow on Friday when it lost a landmark legal battle against AstraZeneca, a British-Swedish drug manufacturer.

Brussels is furious with the company for failing to meet an order of 300 million Oxford vaccine doses by the end of June.

It launched legal action to insist at least 120 million doses must be provided by the end of the month.

The court rejected the bid, though AstraZeneca could face fines if it misses future targets.

In January the EU caused fury when it threatened to impose a border between Northern Ireland and Ireland, in a row over vaccine supplies.

Macron forced into humiliating U-turn as France teams up with Japan in anti-China alliance
Macron uprising: Major French rebellion as ‘phenomenal’ revolt planned –President on brink
Bitcoin mining horror as crypto hunter dies after faulty computer electrocutes him
Bitcoin price: Why is Bitcoin going up? Will Amazon accept BTC by 2022?
£1.4BN Venezuela gold haul: UK to decide fate of 32-tonne stash of precious metal
LEAVE YOUR COMMENTS
Follow us on Facebook
Follow us on Twitter
Follow us on LinkedIn
Follow us on YouTube