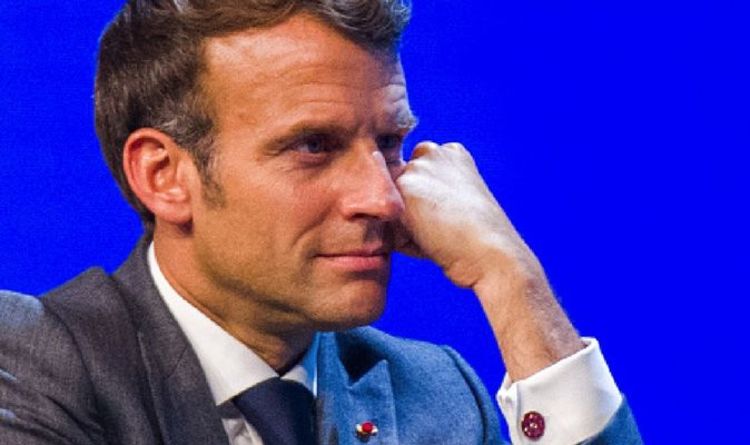 Journalist and author John Lichfield warned the French President could see his parliamentary majority in tatters even if he wins the next presidential elections in May 2022. Writing in The Post, Mr Lichfield claimed the results of the regional elections on Sunday proved President Macron is a “one-man-band” who has failed to build momentum.

He wrote: “Yesterday’s results suggest that Macron remains a one-man-band, a solo artist.

“He has not built — and he has made little effort to build — a lasting, centrist political movement. Macronism seems unlikely to survive Macron — whether he departs from the Elysée Palace next year or later.

“At national level, Macron remains a dominant, although widely disliked and distrusted figure.

“On the ground, Macron’s party, La République en Marche (LREM), is struggling to build a grassroots movement, which suggests that Macron may have difficulty in winning the parliamentary elections next June, even if he wins the presidential election in May.”

Emmanuel Macron is still polling as the frontrunner for the 2022 elections (Image: GETTY)

Aurore Bergé, an MP for LREM, said the result was a democratic “slap in the face”.

She added: “I’m not going to minimise what has happened.”

The next presidential vote is less than a year away.

Polls show that contest is most likely to result in a repeat of the 2017 duel between Mr Macron and far-right leader Ms Le Pen – only this time the gap between the two will be narrower.

The regional results do not give a representative snapshot of who will win the presidential vote. However, if the far-right were to secure its first-ever regional power base it would send tremors across the political landscape.

Ms Le Pen expressed frustration at a record low turnout, as the centre-right made its first comeback at the ballot box since a disastrous showing in the 2017 presidential election.

The high abstention rate in Sunday’s first-round vote, projected at 68.5 percent by pollster Elabe, coincided with a sunny Sunday and emergence from months of tough COVID-19 curbs.

Ms Le Pen said: “I can only but regret this civic disaster, which has very largely deformed the electoral reality of the country and given a misleading idea of the political forces at play.

“If you want things to change, get out and vote.”

An IPSOS exit poll showed the centre-right Les Republicains winning 27.2 percent of the national vote, ahead of the far-right National Rally on 19.3 percent, followed by the Green party, the Socialist Party and Mr Macron’s La Republique en Marche on 11.2 percent.

For Ms Le Pen’s far-right party, that is a drop of more than seven percentage points nationwide compared to the last election in 2015, which came on the back of the Paris Islamist attacks.

The regional elections, for which the second round of voting will be held on June 27, offer a taste of the voter mood ahead of next year, and a test of Ms Le Pen’s credentials.

She has made a concerted push to detoxify her party’s image and erode the mainstream right’s vote with a less inflammatory brand of eurosceptic, anti-immigration populist politics.

In the northern Hauts-de-France region, Les Republicains performed stronger than expected, according to exit surveys, polling ahead of the far-right with a wider-than-forecast margin.

The party’s lead candidate in the north, Xavier Bertrand, who is pitching to be the conservative’s presidential candidate in 2022, said the centre-right had shown it was the most effective bulwark against the far-right.

Opinion surveys project Ms Le Pen will poll highest in the first round of next year’s presidential vote, propelled by a support base fed up with crime, threats to jobs from globalisation and a ruling elite viewed as out of touch with ordinary citizens.

Ms Le Pen’s party has never before controlled a region.

If she wins one next week, it would send a message that a National Rally president in 2022 cannot be ruled out.

Tunisia unrest: What is happening in Tunisia right now?
Macron forced into humiliating U-turn as France teams up with Japan in anti-China alliance
Couple building nest egg for baby daughter using stocks & shares – ‘real advantage’
Hundreds of people in Uganda injected with water instead of Covid vaccine
‘Ridiculous’ EU blasted by Yanis Varoufakis as eurozone crisis deepens after ECB plan
LEAVE YOUR COMMENTS
Follow us on Facebook
Follow us on Twitter
Follow us on LinkedIn
Follow us on YouTube