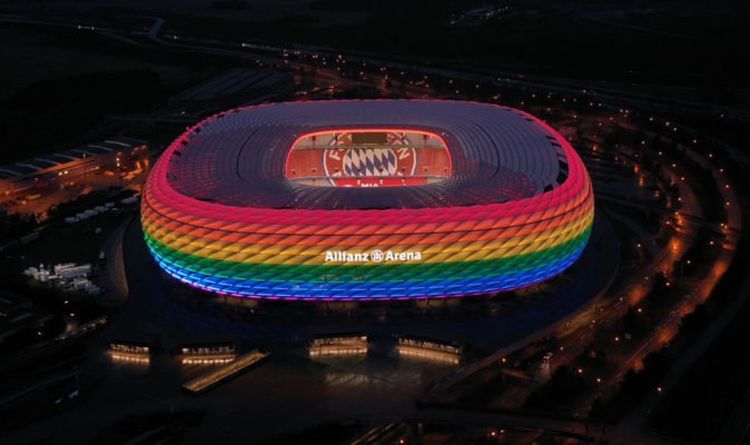 The football authority said it received a request from Munich mayor, Dieter Reiter, on Monday, asking for the Allianz Arena to be lit up in rainbow colours for the Germany vs Hungary match tomorrow (June 23).

The request was made in protest against a new anti-LGBTQ law passed in Hungary on June 15. The legislation bans the sharing of content seen as promoting homosexuality and gender change to under 18s.

Uefa has denied the request because it believes the gesture has a “political context” but proposed alternative dates for the stadium to be lit up.

A statement read: “Uefa understands that the intention is also to send a message to promote diversity and inclusion, a cause which Uefa has been supporting for many years.

“And consequently, Uefa has proposed alternative dates for the illumination which align better with existing events.

“Racism, homophobia, sexism, and all forms of discrimination are a stain on our societies – and represent one of the biggest problems faced by the game today. Discriminatory behaviour has marred both matches themselves and, outside the stadiums, the online discourse around the sport we love.”

Christopher Street Day is an annual LGBTQ+ celebration held in cities across Germany and Switzerland in memory of the Stonewall Riots in New York in 1969.

A statement from Munich city council confirmed that rainbow flags will be flown from the town hall on the day of the Germany vs Hungary game to “make a clear statement”.

Péter Szijjártó, Hungary’s foreign minister, welcomed Uefa’s decision. He said: “Thank God that in the circles of European football leadership, common sense still prevails and they did not play along with the political provocation against Hungary.”

How much money you really need to be happy – the minimum salary for life satisfaction
Self-employed guidance issued as SEISS take-up problems arise – how to keep ‘above water’
China ramps up nuclear capability as it begins construction on second atomic base
Donald Trump could be forced to testify over ‘deadly serious’ Capitol riot, warns official
State pension age changes may affect your free bus pass and when you retire
LEAVE YOUR COMMENTS
Follow us on Facebook
Follow us on Twitter
Follow us on LinkedIn
Follow us on YouTube