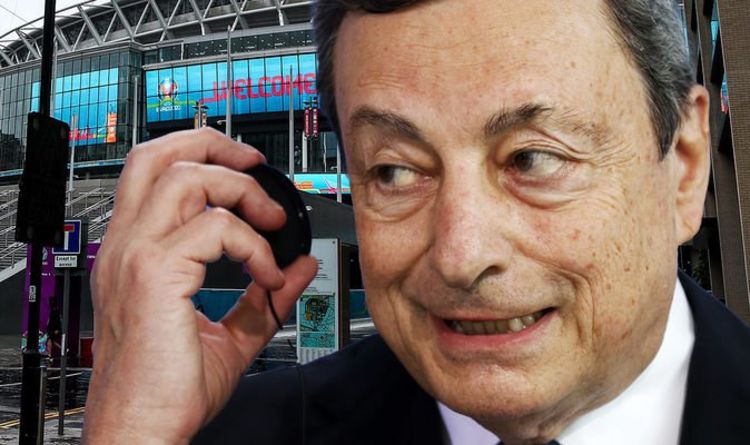 In a blunt attack on the UK, the Italian leader said he was working hard to stop the final of the UEFA Euro 2020 to be held in Wembley. Asked if he was in favour of switching the final in Rome, Mr Draghi said at a news conference with German Chancellor Angela Merkel: “Yes … I will try to stop the final being held in a country where infections are rising quickly.”

But UEFA representatives confirmed there are no plans to move the big sporting event.

In a statement in response to Mr Draghi’s comments, they said: “The National Federation and the English authorities are working closely and successfully to organise the semi-finals and final at Wembley, and there are no plans to change the venue for those matches.”

The UK reported over 10,000 new coronavirus cases on Monday.

But despite the rising number of positive cases, Health Secretary Matt Hancock said Britain is working on easing travel restrictions for the fully vaccinated to allow people to enjoy a summer holiday on Europe’s beaches.

Currently, British citizens are essentially prevented from travelling to most countries – including those in the European Union – as the quarantine and testing rules are so cumbersome and expensive.

The travel industry has demanded that Britain removes its COVID testing and isolation requirements for fully vaccinated travellers, similar to a scheme to the European Union.

Mr Hancock told Sky News that the government did want to let people have a family holiday, but only when it was safe to do so.

He said: “We’re working on plans to essentially allow the vaccine to bring back some of the freedoms that have had to be restricted to keep people safe.”

Italy, on the other hand, reported 21 coronavirus-related deaths on Monday against 17 the day before, the health ministry said, while the daily tally of new infections fell to 495 from 881.

Italy has registered 127,291 deaths linked to COVID-19 since its outbreak emerged in February last year, the second-highest toll in Europe after Britain and the eight-highest in the world.

The country has reported 4.25 million cases to date.

There were nine new admissions to intensive care units, down from 12 on Sunday.

The total number of intensive care patients fell to 385 from a previous 389.

‘Ignorant and abusive’ EU sparks furious row in Spain -‘Bloc’s rules not in our interests’
Macron uprising: Major French rebellion as ‘phenomenal’ revolt planned –President on brink
State pension: Your National Insurance record can affect what sum you receive – check now
US wildfires mapped: Apocalyptic wildfires burning – where are fires now?
Vile anti-lockdown protester punches horse in the face as protest erupt in Australia
LEAVE YOUR COMMENTS
Follow us on Facebook
Follow us on Twitter
Follow us on LinkedIn
Follow us on YouTube