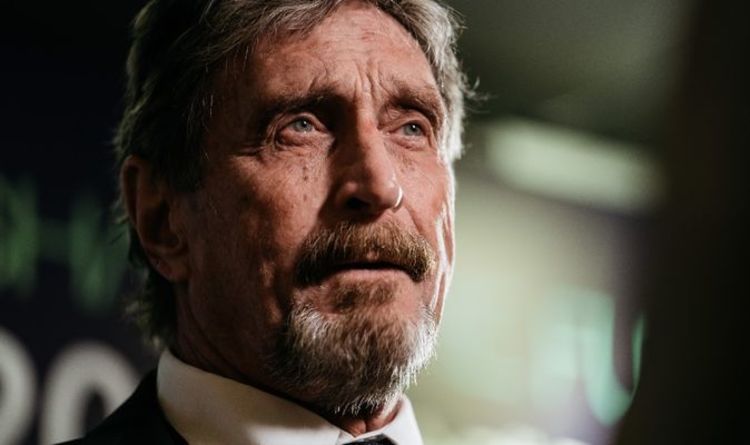 Software guru John McAfee has been remembered as “larger than life” after the tech entrepreneur’s body was discovered in the Catalan Prison where he was being held on Wednesday afternoon. The controversial software developer achieved worldwide renown for producing the world’s first commercial anti-virus software. Mr McAfee was facing charges of tax evasion and was awaiting extradition from Spain to the US at the time of his death.

The 75-year-old was found in his cell in Brians 2 prison, in Sant Esteve de Sesrovires, Catalonia.

Circumstances surrounding his death pointed to Mr McAfee having taken his own life, according to the Catalan Justice Department.

“Of course McAfee the founder of the anti-virus software company McAfee.”

She added: “He was arrested in October of last year and he was awaiting extradition when he was found dead.

“Apparently had been told just hours prior to this that he would be extradited and face federal charges in the US, according to local media.”

“John McAfee reportedly dead by suicide in a Spanish prison.”

Noting McAfee’s run for the US Presidency for the Libertarian Party in 2020, She added: “Run for president so he has definitely led a…how would you describe his life…larger than life.”

Following his imprisonment, McAfee tweeted his reflections on prison life.

On June 10, he wrote: “There is much sorrow in prison, disguised as hostility.

“The sorrow is plainly visible even in the most angry faces.

“I’m old and content with food and a bed but for the young prison is a horror – a reflection of the minds of those who conceived them.”

Anyone in need of confidential emotional support can call Samaritans free on 116 123 or email them at josamaritans.org.

One rule for them! Fury as Macron, Jill Biden and WHO chief all in Tokyo for Olympics
Macron shamed over ‘hypocritical’ Yemen stance as spotlight turns onto EU arms sales
Where is Leverkusen in Germany? Five missing in industrial explosion
Macron slammed over vaccine passports for hospital visits –’violation of Hippocratic oath’
Freetrade senior analyst explains ‘when to hit the sell button’
LEAVE YOUR COMMENTS
Follow us on Facebook
Follow us on Twitter
Follow us on LinkedIn
Follow us on YouTube