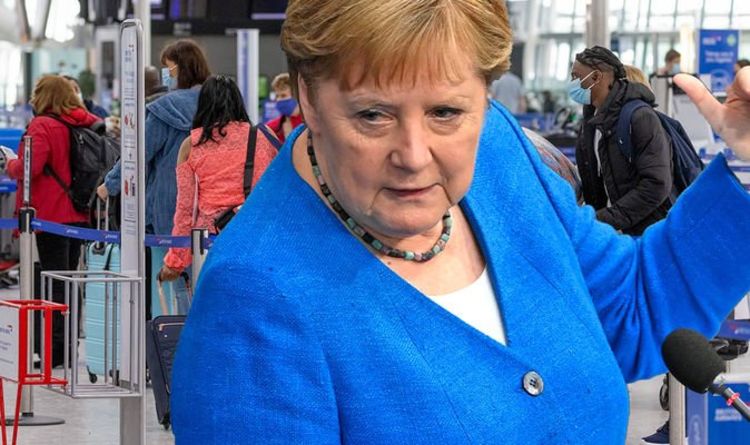 The German Chancellor wants better coordination to fight the spread of the highly transmissible Delta variant that is quickly spreading throughout the UK and is now making its way through the bloc. Ahead of Thursday’s summit with fellow EU leaders, she told the Bundestag lower house of parliament: “In our country, if you come from Great Britain, you have to go into quarantine – and that’s not the case in every European country, and that’s what I would like to see.”

The warning from Mrs Merkel comes after she raged at Portugal – a country that is allowing British tourists entry without the need to quarantine.

France, led by President Emmanuel Macron, is also allowing those with two vaccine doses in the UK to enter the country without going into isolation.

The German Chancellor launched a stinging attack against Portugal and lambasted its Government for failing to close the borders to UK visitors at the beginning of the spread of the Covid Delta variant.

Speaking alongside European Commission President Ursula von der Leyen at a press conference, she warned the bloc’s failure to agree to a joint travel policy on coronavirus was starting to “backfire”.

Mrs Merkel said: “What I regret is that we have not yet been able to achieve a uniform behaviour among the member states in terms of travel restrictions.

“We now have a situation in Portugal that could perhaps have been avoided, and that’s why we have to work even harder on this.

“We’ve made pretty good progress in recent months, but we’re not yet where I would like the European Union to be.”

On Wednesday, the UK recorded 16,135 new Covid cases – the highest reported daily toll since February 6 – as the mutant Delta+ variant hits the country.

This was a huge jump from the 10,633 new infections announced on Tuesday.

There were also been 19 new deaths reported within 28 days of a positive test – almost quadrupling from the five recorded the previous day – bringing the UK total to 128,027.

In addition, figures published by the Office for National Statistics (ONS) revealed there have been 153,000 deaths registered in the UK where coronavirus was mentioned on the death certificate.

Boris Johnson’s spokesman said 41 cases of the strain have so far been identified in the UK.

He added PHE had already put additional measures in place where the variant had been detected.

This is an increase of 299,837 compared to the previous day.

Separately, figures published by the UK’s four health agencies shows six in 10 adults are estimated to have received both doses of a Covid vaccine.

Health Secretary Matt Hancock said: “With more and more evidence emerging on just how effective two doses of our vaccines are in protecting against the Delta variant, it’s great to see three in five adults have been double jabbed, so we’re well on our way to the whole country getting the fullest possible protection.

“We’re so close now to ensuring the entire adult population is protected – now everyone aged 18 and above can make an appointment, so make sure you book in for your first and second doses as soon as possible.”

HMRC update as Britons could reduce tax bill by up to £1,188 – act now
Beijing ‘hurt’ by US coverage of Olympics as Taiwan and South China Sea not on world map
Joe Biden will ‘resign from office for medical issues’ claims former White House doctor
Warning as Putin could trigger Europe-wide gas crisis by strangling key supply –UK at risk
WATCH: Rat Attack! Rodent sends politicians into panic as it enters parliament in Spain
LEAVE YOUR COMMENTS
Follow us on Facebook
Follow us on Twitter
Follow us on LinkedIn
Follow us on YouTube