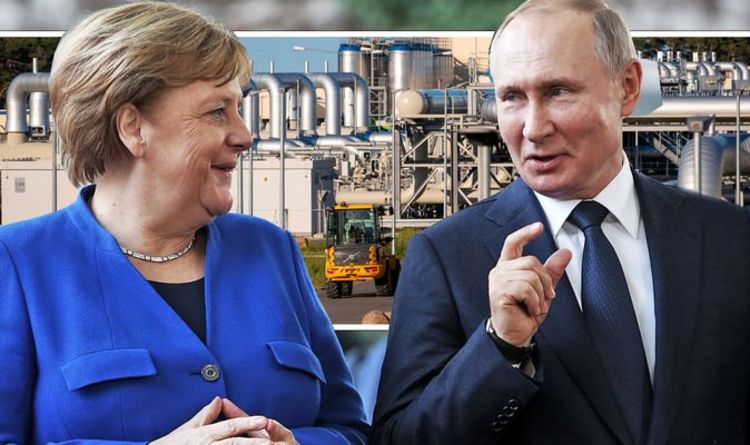 The Chancellor discussed the project with the Russian President today, as the publication of a joint agreement between Germany and the United States was expected. A statement released by the Russian government read: “The leaders are satisfied with the approaching completion of the Nord Stream 2 gas pipeline.

“The Russian president noted the consistent commitment of the German side to the implementation of this project, which is exclusively commercial in nature and aimed at strengthening the energy security of Germany and the European Union.”

America has long opposed the pipeline, which will allow Russia to export gas to Germany and potentially cut off other nations.

However, the Biden administration has chosen not to try to kill it entirely with sanctions.

This evening the Washington Post reported that the US and German governments had reached an agreement on the project, ending a longstanding dispute between the two allies.

Under the deal, Germany agreed to invest in Ukraine’s green technology infrastructure and the US will end its effort to block the pipeline, the Post said.

The Germans also promised a $1 billion energy fund for Kiev.

As part of its agreement with the US, Germany also committed to take national-level actions and press for action, including sanctions, at the European level, if Russia uses energy as a weapon in dealing with other countries, according to a senior US State Department official.

Ukrainian President Volodymyr Zelenskiy said he was looking forward to “frank and vibrant” discussion with his US counterpart President Joe Biden on threats from the Nord Stream 2 pipeline.

The White House said the two leaders would meet in Washington next month to discuss energy issues and threats posed by Russia to the eastern European country’s sovereignty.

Ukraine ratcheted up its opposition to the gas project by preparing to kick-start official consultations with the EU and Germany today.

Dmytro Kuleba, the country’s foreign minister, said on Twitter that official notes to Brussels and Berlin had already been sent.

He made the statement minutes after Germany and the US jointly announced their landmark deal.

Heiko Mass, Germany’s foreign minister, said he was relieved at the signing of the deal with the US.

He tweeted: “I am relieved that we have found a constructive solution regarding Nord Stream 2 with the United States.

“We will help Ukraine build up a green energy sector and push to secure gas transit through Ukraine in the coming decade.”

EU shambles: Von der Leyen faces rebellion from 11 states over Commission’s flagship plan
Grandparents could boost state pension sum by £2,340 if looking after children this summer
UK Covid cost: How much will the pandemic cost? How much will taxes go up?
‘Ignorant and abusive’ EU sparks furious row in Spain -‘Bloc’s rules not in our interests’
Bitcoin price spike as Elon Musk’s Tesla ‘likely’ to accept cryptocurrency as payment
LEAVE YOUR COMMENTS
Follow us on Facebook
Follow us on Twitter
Follow us on LinkedIn
Follow us on YouTube