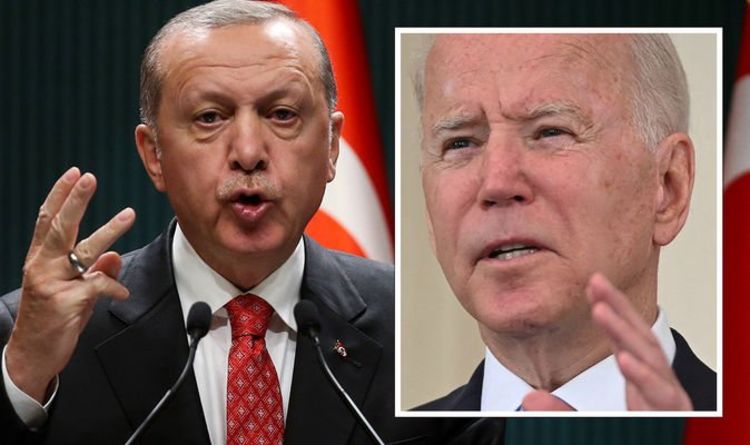 The statement, by a senior US diplomat, came within hours of an appeal by the official Cyprus government over plans by Turkish Cypriot authorities to partially reopen Varosha, an abandoned resort, as Turkey repeated its call for a two-state solution on the island in the face of international criticism. The unnamed diplomat reaffirmed US opposition to such an approach, following on from a statement by US Secretary of State Anthony Blinken, who said: “This move is clearly inconsistent with UN Security Council Resolutions 550 and 789, which explicitly call for Varosha to be administered by the United Nations.

“Since October 2020 when Turkish Cypriots, with the support of Turkey, announced the opening of the Varosha beachfront and began taking actions to implement this decision, Turkish Cypriots and Turkey have ignored calls from the international community and the UN Security Council to reverse their unilateral steps on Varosha.“

Mr Blinken added: “The United States views Turkish Cypriot actions in Varosha, with the support of Turkey, as provocative, unacceptable, and incompatible with their past commitments to engage constructively in settlement talks.

“We urge Turkish Cypriots and Turkey to reverse their decision announced today and all steps taken since October 2020.

Turkish Cypriots, backed by Ankara, said yesterday that part of Varosha – which is now a military zone – would come under civilian control, and would be open for potential resettlement.

It prompted an angry reaction from Cyprus’s internationally recognised Greek Cypriot government, and a chorus of disapproval from Western powers, led by the United States which called the move “unacceptable”.

An estimated 17,000 Greek Cypriot residents of Varosha fled the advance of Turkish troops in August 1974, a month after an invasion in which Turkey captured 36 percent of the island, which remains divided until this day.

Varosha has remained empty ever since, sealed off with barbed wire and no-entry signs.

United Nations resolutions have called for the area to be turned over to the UN administration.

Repurposing the area to Turkish Cypriot civilian authorities effectively challenges a widely-held assumption that Varosha would be among the possible areas returned to Greek Cypriot control in the event of a Cyprus peace settlement.

DON’T MISS
EU handed solution to furious UK row [LIVE BLOG]
Covid could have been in Italy before China confirmed cases – study [DATA]
‘Do as we say, not as we do!’ Furious Britons call out EU [REACTION]

Cypriot Foreign Minister Nikos Christodoulides said: “This is a clear violation of United Nations Security Council resolutions and will have a negative impact on efforts underway to restart talks.”

Speaking today, a day after visiting Cyprus for Tatar’s announcement, Turkish President Tayyip Erdogan, said: “Now, the only demand of the Turkish Cypriots in international negotiations is the recognition of the status of a sovereign state.

Cyprus is in the eastern Mediterranean (Image: GETTY)

To date, Cyprus peace talks have focused on uniting the island under a federal umbrella.

Greek Cypriots reject a two-state deal that would accord sovereign status to the breakaway Turkish Cypriot state which only Ankara recognises.

Under the terms of a 2004 UN reunification blueprint, Varosha was one of the areas which would have returned to its inhabitants under the Greek Cypriot administration.

Abba are thought to have first sung together in Varosha (Image: GETTY)

The plan, which detailed reunification under a complex power-sharing agreement, was rejected in a referendum by Greek Cypriots.

A poignant symbol of Cyprus’s division, in its glamorous heyday Varosha once attracted the jet set and Hollywood royalty including Elizabeth Taylor and Paul Newman.

It is also said to be the first venue where four Swedish singers – later known as ABBA – sang together in 1970.

Martin Lewis shares simple way to tell if you’re being scammed – ask yourself one question
Don’t you DARE! Argentina fires warning to UK after British military exercise in Falklands
China rejects next phase of WHO probe into Covid origin – ‘Impossible!’
Thousands take to streets in mass protest at Macron as anger at French President spreads
On a low income? You could secure a boost of over £1,000 – take action
LEAVE YOUR COMMENTS
Follow us on Facebook
Follow us on Twitter
Follow us on LinkedIn
Follow us on YouTube