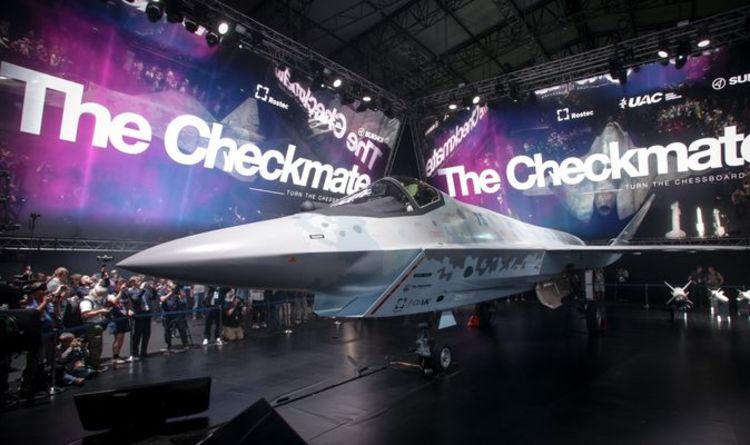 President Putin attended the annual MAKS air show on Tuesday and oversaw the grand unveiling of a prototype of the new Sukhoi fifth-generation fighter jet. The warplane, known as Checkmate, is regarded as a direct rival to the US F-35 stealth fighter, according to Oleg Panteleyev, head of the Aviaport analytical agency.

Kremlin-backed firm Rostec has produced the jet to travel at twice the speed of sound and can even be converted to fly without a pilot on board.

The launch of the aircraft was also met with a provocative message as it featured footage of a recent standoff between a UK vessel and the Russian military in the Black Sea.

Russian officials expect the Sukhoi jet to take to the skies as early as 2023.

More than 300 aircraft of its kind are set to be produced over the next 15 years.

Rostec’s chief, Sergei Chemezov, said each jet is expected to cost between $25million and $30million – with demand expected across the Middle East and Asia.

Yury Slyusar, head of the United Aircraft Corporation, said: “Our aim is to make the cost per flight hour as low as possible, to make it economical not only to buy but also to operate.”

Mr Panteleyev said: “Light-class fighter jets are more in demand in the world than heavy-class ones – they are cheaper and more suitable for states that don’t have large territories.”

The latest show of military power comes just days after Moscow successfully fired a missile at seven times the speed of sound.

On Monday, the Russian defence ministry said a warship has fired a hypersonic cruise missile and hit a surface target more than 200 miles away.

The new generation weapon was launched from the Admiral Gorshkov ship as it sailed in the White Sea.

During the speech, he warned the missiles could hit almost any point in the world.

The hypersonic missile was also tested in October 2020 on President Putin’s birthday.

President Putin highlighted the significance of the achievement and stated it was a “great event not just in the life of our armed forces but for all of Russia.”

He added: “Equipping our armed forces, the army and the navy, with the latest, truly unparalleled weapon systems will certainly ensure the defence capability of our country in the long term.”

Vile anti-lockdown protester punches horse in the face as protest erupt in Australia
Beat pension age hike and access pot early – thanks to HMRC loophole
Spain’s far-right vows to fight new Franco bill as past continues to haunt country
M74 minibus horror crash kills schoolgirl, 15, and leaves two others fighting for life
Furious Joe Biden lets rip on Capitol rioters – ‘I don’t care if you think I’m Satan’
LEAVE YOUR COMMENTS
Follow us on Facebook
Follow us on Twitter
Follow us on LinkedIn
Follow us on YouTube