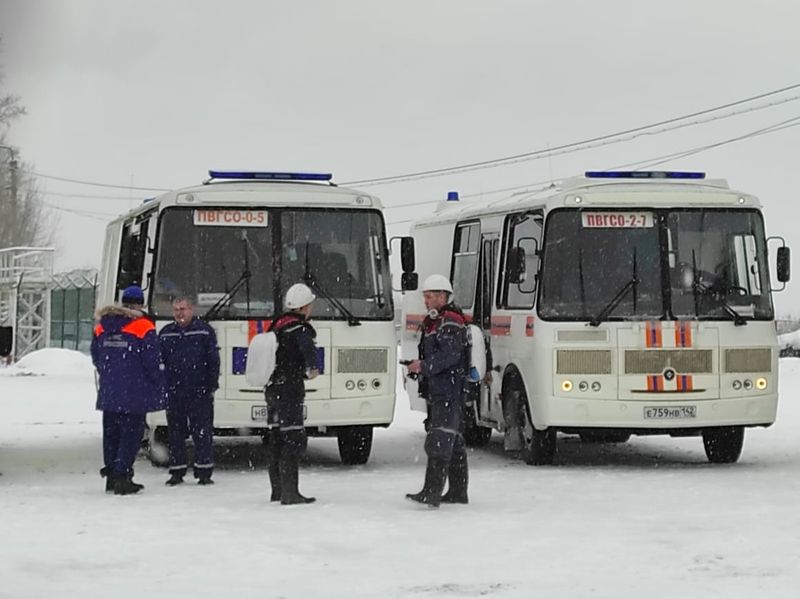 Specialists gather near buses during a rescue operation following a fire in the Listvyazhnaya coal mine in the Kemerovo region, Russia, November 25, 2021. Russian Emergencies Ministry/Handout via REUTERS

By Alexander Marrow and Tom Balmforth

MOSCOW (Reuters) -At least 11 miners died in a coal mining accident in Russia’s Siberia on Thursday and an operation to rescue 35 more people stuck underground was suspended due to the risk of an explosion, the region’s governor said.

In a further grim twist, the Emergencies Ministry said a team of rescuers was later declared missing after they failed to report in with other rescue units who were ordered to return to the surface.

The ministry did not say how many rescuers were missing.

The accident happened when coal dust caught fire in a ventilation shaft in the Listvyazhnaya mine in the snowbound Kemerovo region early on Thursday, filling the mine with smoke, the TASS news agency cited local emergency services as saying.

“The chance of an explosion is very high. We’ve decided to suspend the search and rescue operation until the concentration of gas reduces,” Regional Governor Sergei Tsivilev said. Methane levels were dangerously high, he said.

Dozens were being treated in hospital, at least some of them with smoke poisoning. Four were in critical condition.

The coal-producing region of Kemerovo roughly 3,500 km (2,175 miles) east of Moscow has been hit by fatal mining accidents for years.

The mine is part of SDS-Holding, owned by the privately held Siberian Business Union. The union had no immediate comment.

Before the rescue operation was halted, the governor said there was still electricity and ventilation in the mine, but that they had lost contact with some people deep underground.

“For now there is no heavy smoke, so we hope that there is no fire,” Tsivilev said on his Telegram channel. “We have no communication lines with these people, the underground communications system is not working.”

Some 285 people were inside the mine when smoke spread through the ventilation shaft, the Emergency Ministry said. At least 239 made it above ground, authorities said. They did not say what had caused the smoke.

On state television, President Vladimir Putin said he had spoken with the governor and emergency officials, describing the accident as a “great misfortune”.

“Unfortunately the situation is not getting easier. And there’s a danger to the lives of the rescuers … We’ll hope they can save as many people as they can,” he said.

The Kremlin said Putin had ordered the emergencies minister to fly to the region to help.

In 2007, Kemerovo was the site of the worst mining accident since the 1991 collapse of the Soviet Union when an explosion at the Ulyanovskaya mine claimed the lives of more than 100 people.

In 2010, explosions at the region’s Raspadskaya mine killed more than 90 people.