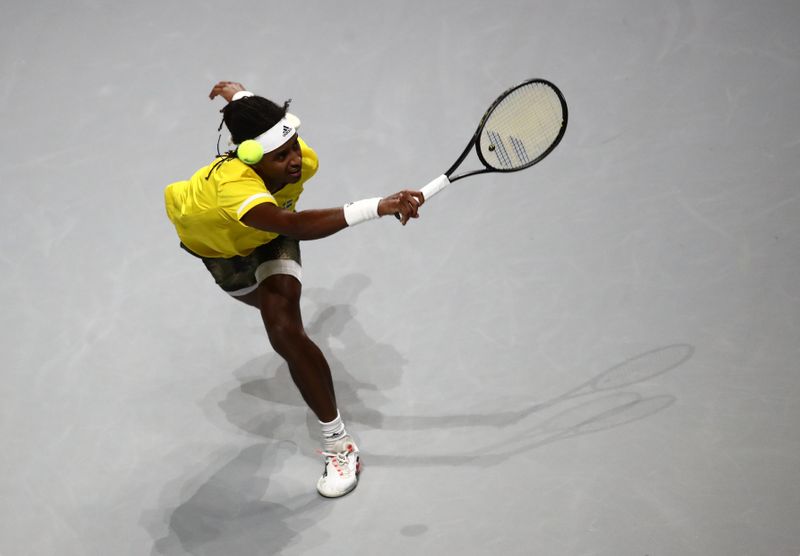 (Reuters) -Brothers Elias and Mikael Ymer comfortably won their singles rubbers against Canada as seven-times champions Sweden made a roaring start in the Davis Cup Finals in Madrid on Thursday.

Runners-up in 2019 but without their top players Denis Shapovalov and Felix Auger-Aliassime, Canada proved no match for the rejuvenated Swedes who are looking to revive past glory.

Australia, second only to the United States in Davis Cup titles, made a poor start in Group D in Turin as they went down 3-0 to 2018 champions Croatia.

France recovered from a poor start in their Group C clash against Czech Republic to win 2-1 in Innsbruck.

Group winners and the two best runners-up progress to the quarter-finals next week with the final in Madrid on Dec. 5.

Holders Spain’s hopes already look bleak, though, without them striking a ball in anger as rising force Carlos Alcaraz was ruled out on Thursday after testing positive for COVID-19.

Already without 20-times Grand Slam champion Rafa Nadal, they were also robbed of another of their heroes of 2019 with Roberto Bautista Agut ruled out due to an abdominal injury.

Spain face Ecuador in Group A in Madrid on Friday.

“I’m very sad about the way that I miss out on something so important and super special for me like the Davis Cup, I was very excited to be able to play for my country,” Alcaraz, who would have made his debut, said on Instagram.

Andre Goransson and Robert Lindstedt made it a clean sweep for Robin Soderling’s team with a 7-6(5) 6-4 win over Pospisil and Brayden Schnur.

“Today my forehand was blasting,” 171st-ranked Elias said. “I was hitting winners for everywhere.”

His higher-ranked brother Mikael produced an impressive match to blunt the power of Pospisil.

“I tried to stay in the moment and tried to enjoy it. At the end it’s just a game, even if it’s a lot we are playing for,” said the 23-year-old world number 93.

“I would say this is probably the most painful loss I have had,” world number 61 Popyrin said.

Nikola Mektic and Mate Pavic made it a miserable day for Australia as they beat De Minaur and John Peers.

Cilic dominated early on against De Minaur but was pegged back and needed to recover from a break down in the deciding set to claim victory.

The Czech Republic’s Tomas Machac caused a huge upset on his Davis Cup debut when the 21-year-old, ranked 143, beat Richard Gasquet 7-6(3) 6-2 to give his side a 1-0 lead in an empty Olympiahalle Arena, a consequence of Austria’s lockdown.

Adrian Mannarino levelled the tie by downing Jiri Vesely 6-7(1) 6-4 6-2 before Pierre-Hugues Herbert and Nicolas Mahut gave France victory with a 3-6 6-4 6-3 win over Jiri Lehecka and Machac.

(Reporting by Rohith Nair and Dhruv Munjal in Bengaluru and Frank Pingue in Toronto, Martyn Herman in London; Editing by Pritha Sarkar and Ed Osmond)