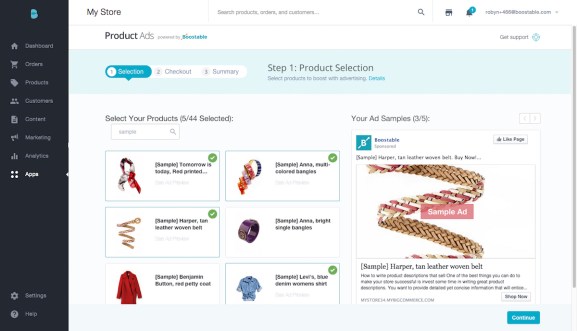 That finding in a survey by ecommerce platform Bigcommerce led to its launch today of a Product Ads tool for nearly automatic creation of social media ad campaigns from product catalogs.

The company says this tool, built in partnership with ad platform Boostable and released first to U.S.-based retailers, is the first integrated ad tool on a hosted ecommerce platform.

Bigcommerce claims about 95,000 active online stores, ranging from first-timers to established merchandisers. Senior communications manager John Yarborough told me that his company’s competitors include the self-hosted Magento and Shopify, which he said tends to have smaller merchants.

The ads can be created in minutes by importing images and descriptions from the retailer’s online product catalog, checking a preview, editing the title and description, and then setting monthly ad spend. The tool automates audience targeting, bidding, and optimization, and multiple campaigns can be conducted via the dashboard. Bigcommerce receives a 20 percent service fee.

The campaigns utilize product types, customer profiles, and behavioral data from each store to target similar users on the social networks. The idea is to find new customers, not just ones who have already visited the store. As the campaign continues, the ads with the most clicks or sales are increasingly emphasized.

On Facebook, the ads are delivered into the News Feed, the right rail of the page, and the News Feed in the mobile app. For Twitter, they appear in Promoted Tweets and Website Cards.

A 2015 study by the National Retail Federation found that Facebook was the top customer acquisition channel for a quarter of retailers. Twitter contends that 60 percent of consumers say they’ve made a purchase from a small- to mid-sized business (SMB) because of information on that social network.

The Bigcommerce survey of SMBs found that 63 percent have used social media ads to drive traffic. It also said about three-quarters of the merchants manage their online ads by themselves.