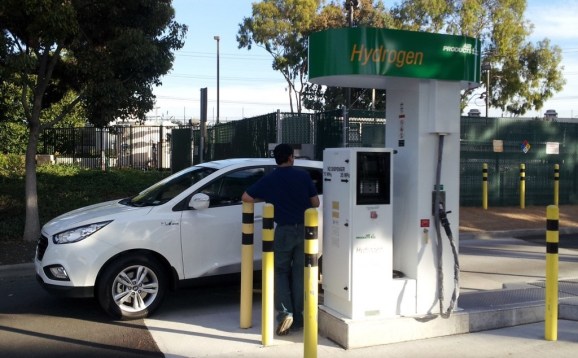 While they enjoy driving their cars, early lessees of hydrogen fuel-cell vehicles in Southern California are complaining that they can’t reliably fuel them at the handful of stations now supposedly operating in their region.

The stations are frequently inoperative, they say, closed for days or weeks at a time.

Moreover, when the stations are functioning properly, they sometimes can only fuel one or two cars before an hour-long wait is required–and some stations can only fuel the cars to half-full.

A private Facebook group for drivers of the Hyundai Tucson Fuel Cell SUV overflows with complaints about these issues, and the lack of accountability among the several different parties who oversee pieces of the nascent hydrogen fueling

[UPDATE: Green Car Reports received a statement from the California Air Resources Board on Friday, which we have appended to this story at the end of page 2.] 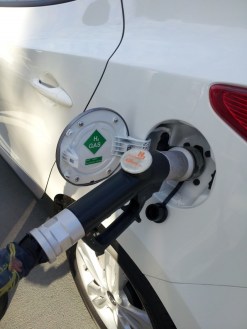 Hyundai includes unlimited free hydrogen fuel as part of its $ 499 monthly lease cost (with $ 3,000 due at signing).

But neither Hyundai nor Toyota, which is in the process of launching its hydrogen-powered 2016 Mirai, is responsible for providing the fuel or ensuring a functioning infrastructure

Instead, that task falls to a variety of organizations that own or operate the stations.

(If we receive a statement from that office on the progress of Southern California’s hydrogen fueling infrastructure, we’ll update this article.)

Last year, the state of California committed $ 100 million over five years to building 100 hydrogen fueling stations in the state by 2020, in partnership with Toyota, Hyundai, and Honda, and private companies like First Element Fuel as well.

Early lessee Paul Berkman of Corona del Mar, for one, is frustrated.

He’s paying $ 500 a month for a vehicle he hasn’t been able to drive for five weeks, because all three hydrogen stations within 20 minutes of his home or workplace have been down for more than a month.

Berkman told Green Car Reports that the closest station, five minutes away at a Shell site in Newport Beach, has been “struggling”–and that at best it can only fill his Tucson Fuel Cell to half capacity

Ten minutes away, a station by the University of California–Irvine campus has been closed for upgrades. 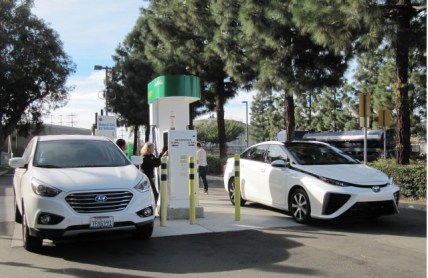 Other fuel-cell drivers, he said, told him that station “really suffered” from demand, with occasional lines of one or more drivers waiting for it to come up to pressure so they could refuel.

And a model “tri-cycle” station in Fountain Valley, about 15 minutes from his home–which used methane from buried trash as a feedstock, lowering its carbon footprint–has now been shuttered for almost five months, he said.Berkman is hardly alone. On the private Facebook group, one Tucson Fuel Cell driver wrote:

I have leased a fuel-cell vehicle for a little over a year now. The expectations that were being portrayed then–15 stations being up by the end of 2014–fell woefully short. There are eight so-called active consumer stations, with three currently working as of this writing.

They go down for months at a time, and I find the claims now being made–that there will be 20 new ones in 2015–as bordering on gross misrepresentation. I see NOTHING in the way the California Fuel Cell Partnership and the State of California are handling the current stations that leads me to believe that this will be the case.

I would say that my wife and I are HUGELY disappointed as we firmly believe in this technology …. But if someone does not plant a huge boot in the behind of the people who are in control of delivering the fueling infrastructure, this will be an epic fail.

I for one did not lease my vehicle to pay $ 500-plus a month so that this grand experiment could be conducted with my research dollars.

I’m about ready to demand they take my Fuel Cell vehicle back so I can get a vehicle that I can actually drive! Anyone else feeling the same?

It’s often said that you can identify the pioneers because they’re the ones with arrows in their backs.

But with Toyota now taking applications from Californians interested in its 2016 Toyota Mirai fuel-cell sedan, it remains unclear to what extent a hydrogen fueling

infrastructure can be created and kept running as the number of hydrogen-powered vehicles in the region rises by a factor of 10.