California is introducing a new ‘Plus-Up’ pilot project that should make plug-in hybrids and electric vehicles a lot more affordable.

Considering recent news that prices on used electric cars are on a downward spiral, and with families potentially eligible to receive as much as $ 12,000 toward the purchase of an electric car (used is fine)—plus up to $ 2,000 for a charging unit—some households could land an electric vehicle at net-zero cost.

If you live in California and think this is great news, it is. But hold on before you head to the dealership. To qualify, you have to live in one of two problematic air-pollution zones: either the South Coast Air Quality Management District (covering some of Greater Los Angeles) or the San Joaquin Valley Air Pollution Control District.

Specifically, within those regions, you must reside in “a zip code that contains a disadvantaged census tract,” as the Air Resource Board explains (this document, with a series of localized maps, helps clarify that). 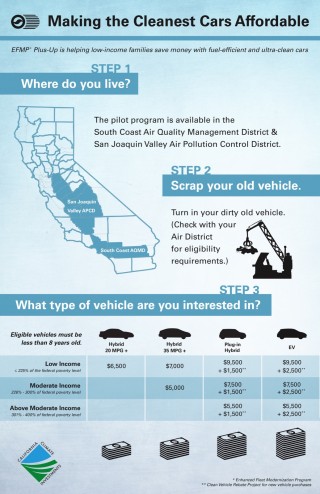 Simply put, buyers with the lowest incomes, purchasing the cleanest vehicles, are eligible for the highest incentive amounts—provided as “cash payments.” Retirees in gated subdivisions and households in other affluent communities probably won’t qualify for this one.

That all applies not just to new vehicles but to used vehicles less than eight years old—which could make some plug-in vehicles and electric cars very, very affordable.

The incentives actually apply to non-hybrid, gasoline-engine vehicles, too. In that case you don’t even have to be in one of those disadvantaged tracts, but you still need to live in the air-quality districts.

It even covers going carless

And if you’re thinking of going carless, you’re also in luck there. The program doesn’t even require you to buy a replacement car. Instead, depending on your income level, you could, in return, get public transit passes worth between $ 2,500 and $ 4,500.

You might say that the program resembles the Car Allowance Rebate System (CARS), or Cash for Clunkers, as it was far more widely termed. That program was national in reach and retired more than 690,000 vehicles, incentivizing their replacement with more fuel-efficient new vehicles.

For more information and to clarify eligibility, call the San Joaquin Valley Air Pollution Control District, at 559-230-6000, or the South Coast Air Quality Management District, for the Greater LA region, at 909-396-2647.