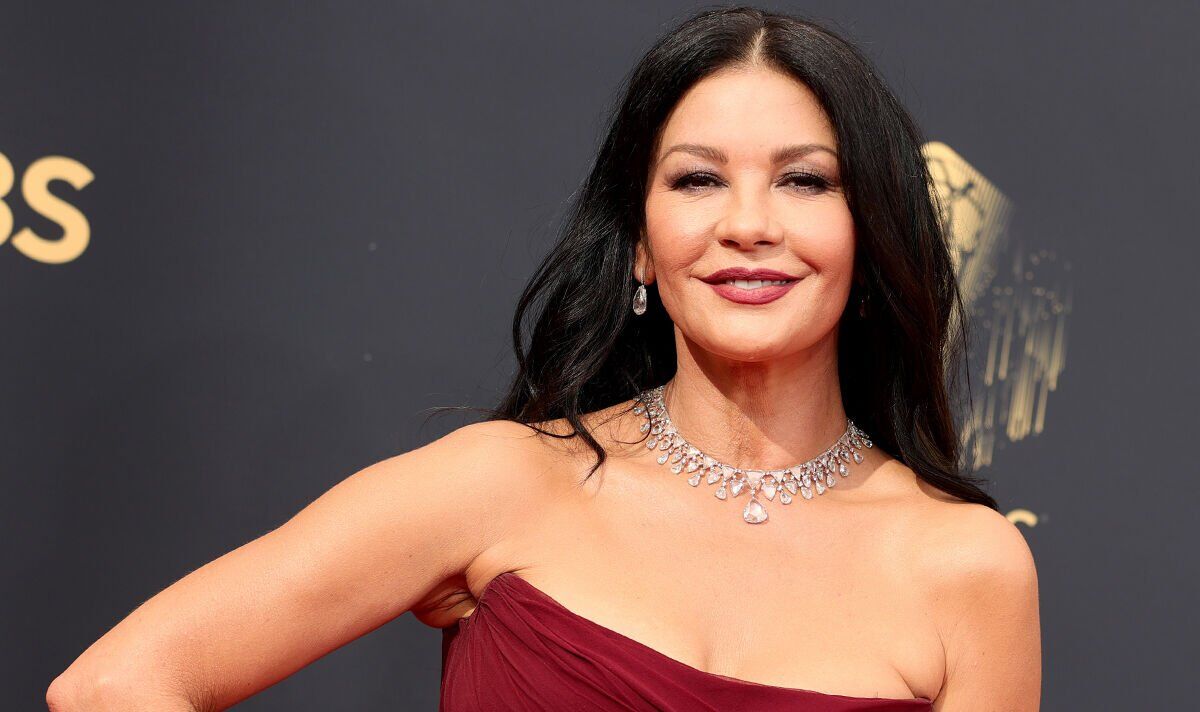 Today, at 1:40pm on Channel 5, The Mask of Zorro hits TV screens. While it was a triumphant success for the movie’s lead, Antonio Banderas, it was Catherine Zeta-Jones who built her career on the movie’s popularity. She has since opened up about what she kept from the movie set, before revealing how she thanks the 1998 film for her marriage to Michael Douglas.

Zeta-Jones recalled in a 2021 essay: “I’ve collected a lot of good-luck charms over the years. My husband calls it my bric-a-brac. But out of everything I’ve saved, my sword and spurs from the Zorro films are my favourites because they represent such a pivotal moment in my life.”

The Welsh star noted how, before she took her leading role in Zorro, she had acted somewhat in the UK, but was “relatively unknown” in the USA.

Everything changed when she was in the USA filming a TV version of the movie Titanic, however. Legendary director Steven Spielberg saw the young 27-year-old and was enamoured by her. He flew her out to Mexico as soon as possible to audition Zeta-Jones for The Mask of Zorro.

“The next thing you know,” she wrote. “I got my big break working not only with the wonderful Antonio Banderas but also with one of my idols, Anthony Hopkins, who is from my home country [of Wales].”

Catherine Zeta-Jones spoke out about how Zorro changed her life (Image: GETTY)

Zeta-Jones learned a lot on the film’s set, and even worked with an Olympian to craft her sword-fighting skills. She also experienced a boom in fame almost overnight, but it was her personal life that was the most affected by Zorro’s success.

She later recalled: “Ironically, after we wrapped, [her now husband] Michael [Douglas] went to a private screening of Zorro in Hollywood. He saw me on screen, and it’s how we eventually got to meet and fall in love. So that film did not just change my career, it changed my life entirely.”

Douglas gave his own version of events years later. He remembered being stunned by Zeta-Jones’ beauty on the silver screen. He said: “I’m watching this movie and I go: ‘Wow, who is this girl? She’s incredible.’ A month later, I’m at the Deauville Film Festival … and I see on the schedule, the next day at the festival, they’re gonna have Zorro there!”

After learning that Zeta-Jones was going to be in town for one night only, he felt compelled to invite her out for a drink with him.

Catherine Zeta-Jones in The Mask of Zorro (Image: SONY)

Douglas recalled: “Sure enough, I must have been batting a thousand because after the movie, I’m sitting in the bar, and like Lawrence of Arabia, this mirage comes through the lobby. I’m thinking: ‘Oh my goodness!’ We sit down and we have a little nightcap.”

The sight of his future wife obviously got the better of him, as Douglas ended up dropping an unbelievable faux pas when their conversation fell silent. He looked at Zeta-Jones, the beautiful woman he had just met, and predicted: “I’m gonna be the father of your children.”

Zeta-Jones didn’t bat an eyelid at her potential suitor, who is 25 years her senior. Instead, she told him exactly how she felt about his demeanour.

Douglas continued: “She looked at me and she said: ‘I’ve heard a lot about you. I guess it’s all true. Goodnight.’ And she left. Then, she left [the festival] early the next morning.”

That was how the couple met, and before long they were dating. Two years later, in 2000, the Hollywood royalty were married. Before long, they had two children together, Dylan and Carys.

Looking back on the Zorro franchise, Zeta-Jones said: “By the time we filmed the sequel, The Legend of Zorro [in 2005], we had our two beautiful children. I remember Michael even brought them to the set on my birthday, and my son got all dressed up for it.”

Zeta-Jones also looked back fondly on filming both the Zorro movies. Not only because they did so much for her Hollywood career, but because she was given such active roles in both pictures. She said: “Playing Elena was so much fun because she was a woman ahead of her time, but preparing for the role was like boot camp. It was 99 degrees, and every day we’d rehearse choreography, dancing, dialect, horseback riding, and sword fighting, and that’s all while I was wearing a corset, three petticoats, a skirt, a top, and a mic pack.”

At the time of writing, Zeta-Jones’ net worth is a reported $150 million alone. When combined with Douglas, they have a reported net worth of $350 million.