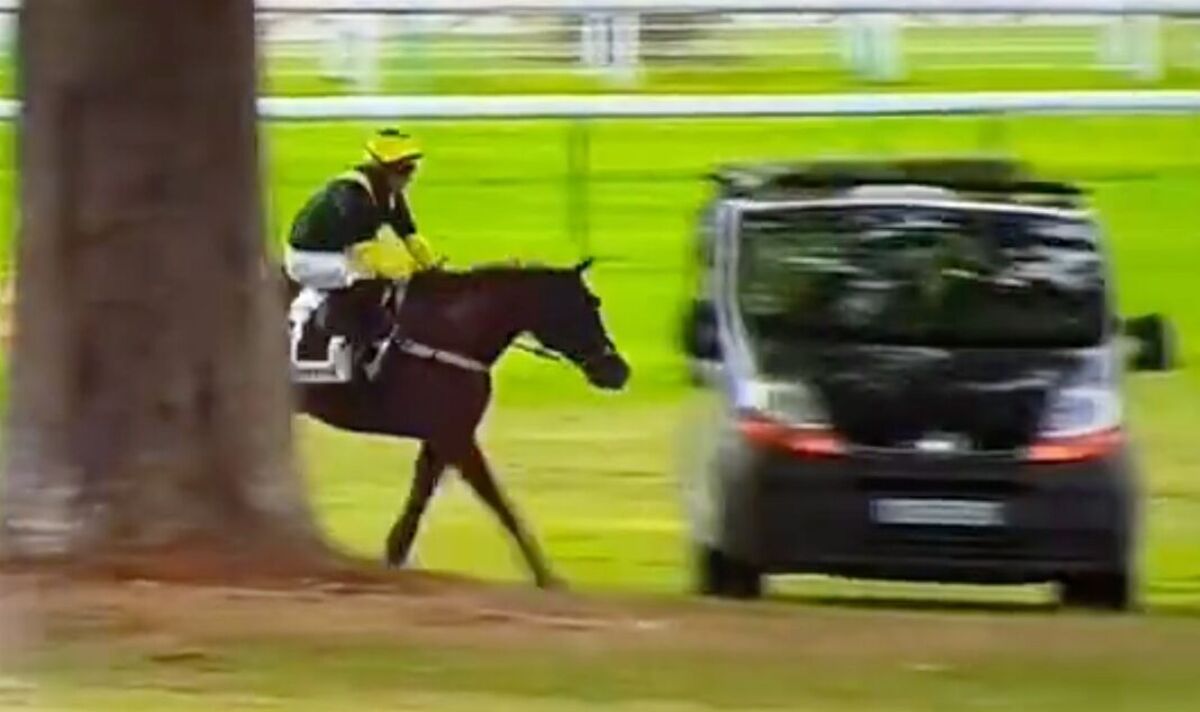 A horse was hit by a van before a race at a meeting in France in dramatic scenes, before managing to recover to claim a stunning victory at a meeting in Compiegne. The incident was captured in footage broadcast to racing fans in the UK appearing to show two horses colliding with the vehicle, but it did not appear to have much of an impact as one of the horses came home to win the race in incredible scenes.

The 12.50 race at Compiegne saw the horses prepare for the 2m 2f run with 14 runners declared, but it was thrown into jeopardy when two racehorses were shown to be going towards the starting point.

At this moment, a black vehicle emerged from behind a tree and drove into the two horses that were in running at full speed. It is not clear if the van had been sitting there stationary before pulling off and had simply not seen the horses galloping, or if it was an intentional act designed to disrupt the race.

The first horse, John Locke, sustained a heavy impact and the five-year-old gelding was withdrawn before the running.

But miraculously, both horses and jockeys came away unscathed from the incident, despite the fact the jockey on board John Locke, Gaetan Masure, was thrown into the air after his horse was grounded by the van.

The 4-1 second-favourite Happyday – ridden by Yorkshire jockey James Reveley and trained by Daniela Mele – was able to continue. And that is where one of racing’s most incredible comebacks in recent years took place in front of astonished racegoers.

Despite appearing to take a lighter hit than John Locke, Happyday’s demeanour still may have been impacted and it looked somewhat shaken by the incident before the race.

But if anything, it seemed to fire up the grey horse as it geared up for the long run on very soft ground. In a wide-open contest, Happyday kept with the frontrunners until Reveley kicked into action just before the final two fences.

The five-year-old kept a steady but quick pace as it is stayed for the final stretch and gained a couple of lengths on its closest competitor, Capodimonte, which was ridden by Lucas Zuliani.

But Happyday proved it would be a happy day for its backers as the 4-1 shot led the running over the finish line before clinching the £53,000 prize, capturing a remarkable race for the gelding after its scary encounter with the van just five minutes before.