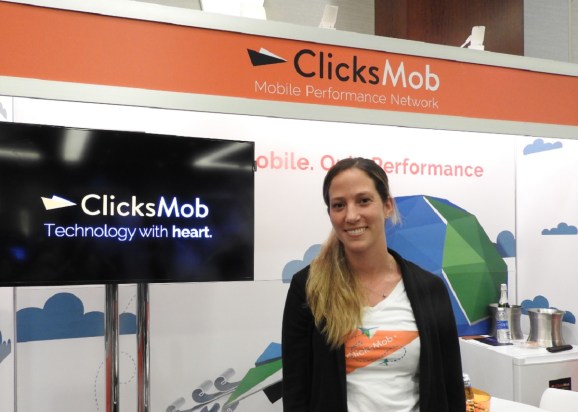 Chen Levanon used to be a hurdler in college. So the Israeli woman is a natural for running a fast-moving business like ClicksMob.

Her company generated $ 10 million in revenue in 2014, and it’s still growing fast. The business is performance-based. App developers take out an ad, or ad agencies create a campaign, and ClicksMob is only paid once the desired result happens, such as when a user installs an app or returns to it a second or third time. If the user doesn’t do anything, then ClicksMob doesn’t get paid. But it does get a cut if it brokers a successful match, enabling a developer to gain a new user by advertising the app on other sites.

It’s a good business. The company — with some staff in both San Francisco and Tel Aviv — was started two years ago and is self-funded. Gartner estimates that revenue from mobile app downloads will triple by 2017. ClicksMob’s clients include Machine Zone, Kabam, Gree, SGN, and Skout.

Levanon is also interesting because she’s a rare female CEO in a male-dominated landscape. Even in Tel Aviv, the modern Mad Men environment of marketing technology companies is mostly run by men. More than half of her management team is female, as is most of the company overall. She has also found time to be a mother of two youngsters, a testament to her can-do attitude and her own experience as a competitive athlete.

We caught up with Levanon at the Casual Connect game event in San Francisco. Here’s an edited transcript of our interview.

VentureBeat: Tell us about your business.

Chen Levanon: We’re a mobile performance platform — only mobile, only performance. We started almost three years ago. I joined the four founders. We’re self-funded. We were profitable from our third month. We’re in San Francisco and Tel Aviv, plus legal in New York. We have about 50 employees, 77 percent of whom are women.

Levanon: Two things are, yeah — that we’re self-funded and that we’re mostly women. It’s our own technology, so we don’t white label. We developed it from scratch. We have 8,000 different traffic sources — publishers, and 500-plus advertisers, developers, anyone who wants user acquisition.

VB: Do you have territories you’re focused on?

Levanon: We’re global. We’re doing all verticals, not just gaming. We’re very strong in ecommerce, shopping, and utilities, even more than games and gambling. It depends on the month you ask about. Last month Korea was our strongest, but the month before it was the U.S. and India. Sometimes it’s 50-50 between iOS and Android, but not always.

Of those 8,000 traffic sources, 85 percent of it is direct traffic, media buys through our SDK. We also have our API in a lot of other apps. We have our native ad traffic.

VB: How many impressions is that per month?

Levanon: We count conversions, so we have billions of impressions a day, millions of clicks a day. We have hundreds of thousands of conversions in a day. We don’t pay per click like everyone else. It’s our own technology, so we care about the absolute value of conversion. Above: Kate Upton in Game of War: Fire Age commercial.

VB: When a user is purchasing something?

Levanon: Yeah. So either installs or engagement. Now we’re running CPE campaigns with Machine Zone. We’ve had a relationship with them for two years, which is a long time in this industry. SGN, around 10 months already. We’re doing burst campaigns, incent and non-incent. As long as it’s mobile and performance, we’re doing it.

This is an immature industry. We’re getting hurt by fraud. But we’re trying to do all the fraud detection we can. If it’s something like click to conversion time, it depends on the size of the app. Also, in the last year, we’ve been working on our next generation of the product. On August 17 we’re launching our new product. It’s going to be amazing. It’ll be more user-friendly.

When a traffic source wants to upload a campaign, they usually have 10 different links per geo, per device. With our technology it’s only one link per campaign. We know how to target different geos and devices behind the scenes.

VB: Who winds up being your main competitor?

Levanon: You know MobPartner, right? Before they were acquired by Cheetah Mobile, they were our direct competitors. They had their own technologies. They did only mobile and only performance. But since the acquisition, they’ve been doing CPC and CPM, so they’re not our competitors anymore. AppLift, maybe, but they’re doing only games, and they use Tune (HasOffers). We have competitors, but it’s only a part of their business. We only do performance on our platform.

VB: What else is going to be a big deal?

Levanon: Implementing our API in a lot of apps. We’ll have native apps. At the same time, we’ll improve our dashboard in the product. We’re also doing a lot of CPE and CPA campaigns, to avoid all the fraud that we’re suffering from. We’ll open more offices around the globe to serve more clients. One big advantage we have is our people. I couldn’t have done this without our people. They’re amazing.

I used to work in investment banking, and I didn’t like it. But something good that I took from it is the human element. The people there are amazing. The way they hire people is amazing. We always say, tech with a touch. It doesn’t matter if the technology is great. If it doesn’t come with perfect service, it won’t fit. We try to give our clients the best service, the best optimization, the best experience. That’s the key.

VB: In Israel, are you as unique as you are here, as a woman CEO?

Levanon: Yes, I’m the CEO for all branches. Here we have only women. I don’t know, I guess I like to hire women. But there aren’t many more like me in Israel. I really want to meet with Sheryl Sandberg. That’s my goal. I think I can learn a lot from her.

VB: I don’t know if this involves you or not, but I’ve written about Facebook’s policy change with regard to mobile user attribution. Does that impact what you do?

Levanon: No, I don’t think so. We don’t acquire users through Facebook. We’re doing all the other stuff besides Facebook, because we need to be a preferred network and at the moment we don’t do that. 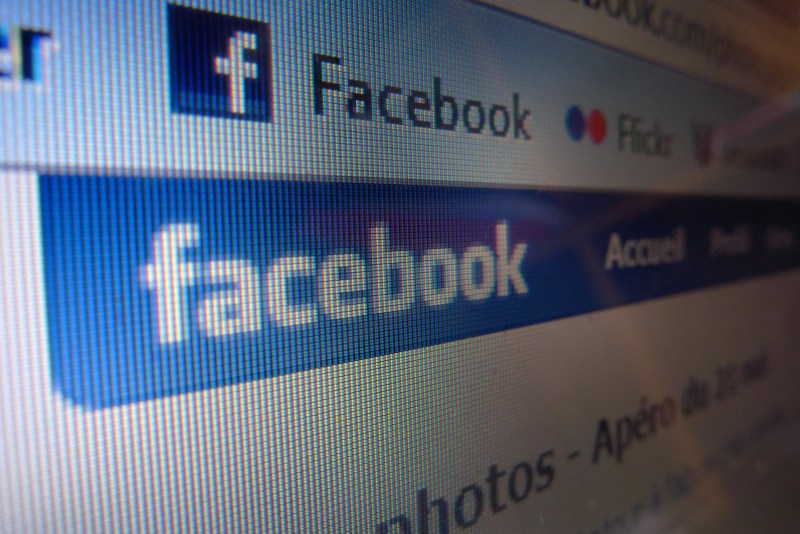 Levanon: Maybe not an alternative, but in addition to them. You always need Facebook. They have the best quality. You can’t ignore it. But there’s a certain point where you’ve taken advantage of it, and then you need more users outside Facebook. That’s where we come in.

VB: And people don’t want to be wholly dependent on Facebook.

Levanon: Exactly. So they try everything. Our point is to try to optimize the campaign and bring positive ROI to our direct advertisers. You know Commission Junction, right? They’re doing great as an affiliate network on the Web. We’re trying to do the same thing on mobile. It’s hard for a web company to make the adjustment to mobile. We started in mobile. That’s our focus. That’s our core business. We’re trying to focus on this and not look too widely around.

Levanon: We were named number 28 in Forbes magazine. They did a lot of due diligence on us. Last year we did about $ 10 million in turnover. This year we think we’ll triple it. Next year it might be three times or five times. Since we’re self-funded, that’s pretty nice. I’ve never said we’re the best, or the only one in our category. But we’ve always tried to be one of the best.

VB: You have a lot of companies in Israel. Why is there so much going on there in areas like marketing tech?

Levanon: Smart people. We have good universities, good R&D, good engineers. We have the Technion, which is like MIT. That might be the reason. A lot of people are doing media and other exchanges. We have many partners like that. They’re not doing pure marketplace. It might be because a lot of companies aren’t self-funded — they have VCs, so they need to keep up their revenue. They’re trying to develop stuff, try this, try that. But I don’t know, to be honest. 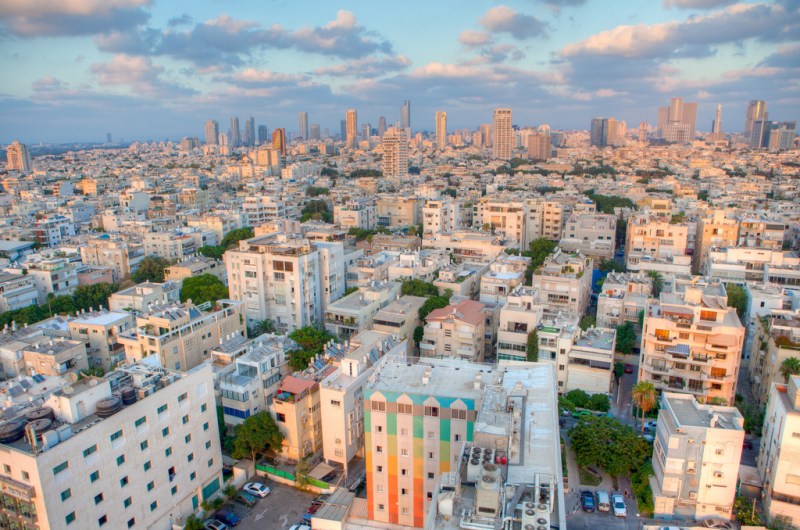 VB: It’s like a marketing technology bazaar out there.

Levanon: We’re a pure performance network. We have 10 engineers in-house, plus the product team and the support team. That’s crazy, when you think about it. We’re always thinking about improving our product. We just need to be better. We’re not focused on anything else.

VB: What else do you need to do in the next year or two?

Levanon: Open more offices. Improve our API. Improve our products. Implement our API and help monetization. We’re in negotiations to close a very big deal with a huge video app and music app here in the States. We opened our office in San Francisco a few months ago and we’re already seeing a change. I moved here because it’s very important for us. I do half of my time here and half of my time there. Now we’re thinking about Europe and Asia. We see that’s important as well.

Video is the trend. We’re promoting a lot of video. Apple Watch might be as well. I bought mine a few months and played with it. It’s OK. I didn’t completely like it. The Bluetooth killed the battery on my iPhone 6+.

VB: Do you need to raise any money or acquire any other companies?

Levanon: We’re not looking to raise any money. We’re just looking to get bigger on our own. We never say no to a good opportunity. If something that’s good for us comes along, maybe. But it’s not part of our strategy in the short term.

VB: As the likes of Google and YouTube come into the space, they seem to have the potential to own more and more of what they don’t have. That seems like future competition. But only if you stand still, I guess.

Levanon: Right. If they give us the right amount, who says no? They have search and they have social media. They always have the SDK as it changes. But I always say it’s not a zero-sum game. The sky is the limit in the mobile industry. You always have more and more apps, more user acquisition, in Android and iOS. It’s growing and growing, so let’s take advantage of it.