“I’m not sure anyone should have made this car,” Tesla Motors CEO Elon Musk said at a press conference just before the debut of the Model X crossover last month.

That somewhat unusual remark referred to the features and complexity of the new electric crossover utility vehicle.

Musk said Tesla could have taken a more conservative approach and simply modified the Model S.

Instead, the company added complex features that it admits may have been unnecessary from a strict sales perspective, though they may surprise and delight shoppers and potential buyers.

One thing’s for sure: For a battery-electric vehicle with very few moving parts in its powertrain, the Model X is indeed a complex vehicle.

While most designers probably don’t lose sleep over sun visors, those at Tesla took things to the extreme, according to Teslarati (via Autoblog).

The Model X’s panoramic glass roof meets up with the top of the windshield — leaving no room for sun visors mounted in the typical manner.

Instead, the sun visors fold away into the A-pillars.

One end of the visor is mounted on a multi-directional hinge, which allows it to swing out and pivot up and down.

The other end has a magnet that holds it fast to the A-pillar when stowed.

This end also anchors to the rearview mirror when the visor is deployed. 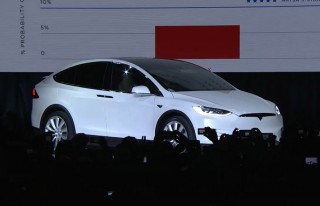 There’s also an illuminated vanity mirror hidden behind fold-out panels on the visors.

Was all of that strictly necessary? Or was it an example of design overkill that may have contributed to the Model X’s many production delays — and a needless complication that a more experienced company wouldn’t have allowed?

The first production Model X crossovers were handed over to their owners late last month at Tesla’s factory in Fremont, California.

They were all fully-loaded P90D Signature Series models, with the 90-kilowatt-hour battery pack — the largest offered by Tesla.

A Model X 90D with the same battery pack and all-wheel drive system — but without performance tuning — will also be offered.

Elon Musk has said that a Model X will generally cost $ 5,000 more than a comparably-equipped Model S. 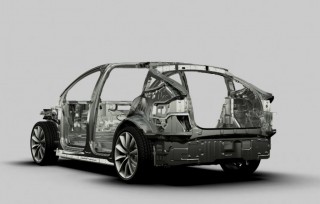 That buys more interior space, along with nifty features like the roof-hinged “Falcon” doors–and those sun visors.

But it also comes with decreases in performance and range owing to the crossover’s larger size.

Owners and potential buyers will decide whether the range, design flourishes, and unique appeal of the Model X let it sell in volumes similar to those of the Model S — which is now at a volume around 100,000.