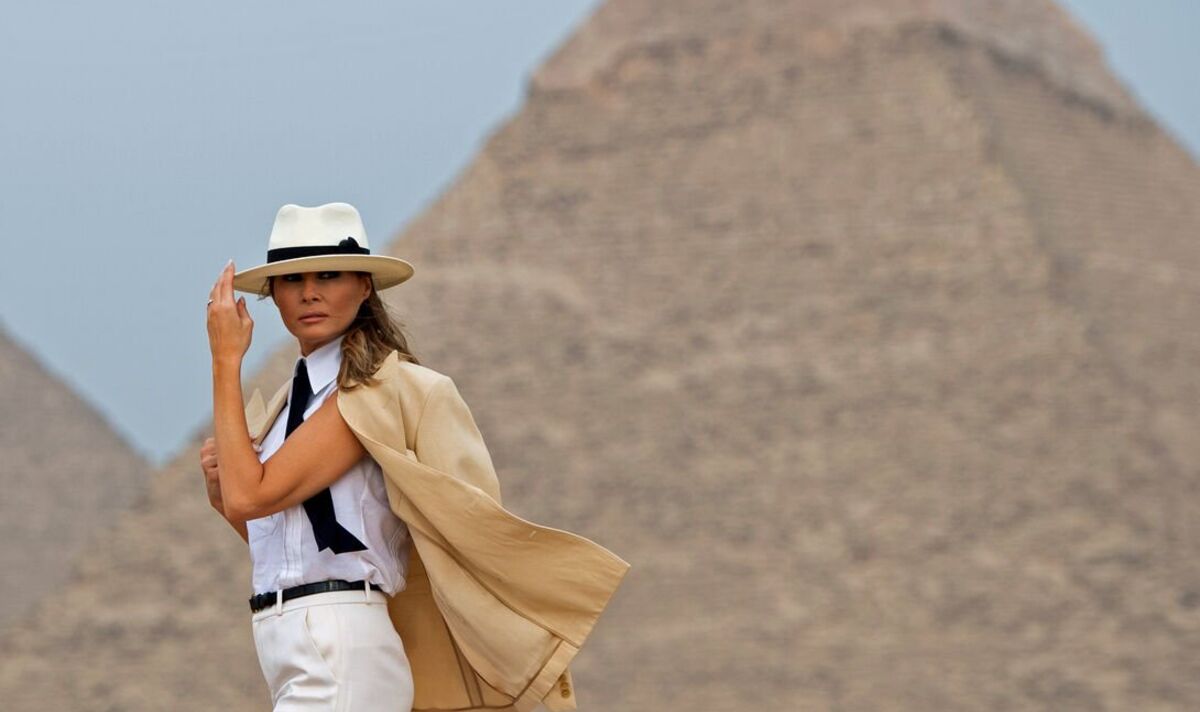 To meet Queen Elizabeth at Buckingham Palace in 2019, Melania opted for a Dolce & Gabbana look consisting of a white dress with a navy blue belt which added a pop of colour. She added a wide-brimmed hat by Hervé Pierre with a touch of navy blue.

She coordinated with Camilla, who also wore a white dress with a matching hat. Sharing a sketch on Instagram, Dolce & Gabbana explained: “Here is the sketch of the hat I designed for our First Lady for her State visit in England to meet Her Majesty the Queen.”

Princess Diana once wore a very similar design herself and she was a fan of flamboyant hats for royal outings. Sarah Marshall from designer brand John Boyd explained: “Princess Diana frequently visited his shop but preferred to be in his messy workroom where the milliners were working on the hats.

“He was always very discreet about his royal clientele, who rewarded him with their loyalty.” Melania, however, opted for a hat by her frequent stylist, Hervé Pierre.

In an interview with WWD, Pierre spoke about the pressure of such an occasion: “You have to be perfect. Even if I didn’t design the pieces, I wanted her to be immaculate. To represent the US is a big honour and I wanted her to look her best.”

READ MORE: Hair: The ‘only’ time you should wash your hair – expert tips

Talking about Melania, he said: “She is lovely. Listen I know a lot of people don’t know her, but I’m lucky to know her a little bit.” In 2019, Melania wore a white polka dot dress at the White House as she and Donald Trump prepared to travel to Atlanta, Georgia.

The dress featured a high neck and she combined it with a pair of black sunglasses, a black snakeskin belt and a pair of black pumps. She added a cream coat over her shoulders, which showed the sleeveless dress underneath.

Polka dot dresses have been a favourite among young royal women for a while and Diana chose a very similar look to attend Ascot in 1988, donning a dress by Victor Edelstein and a hat by Philip Somerville.

The former First Lady of the US visited Egypt in 2018 during a solo trip where she opted for a safari style with a chic masculine twist to pose in front of the pyramids, just like Diana did in 1992.

Princess Diana wore something similar at the pyramids in 1992. An almost identical pale, desert-appropriate dress, but with a flowy skirt and matching jacket.

Melania wore a pith helmet in Kenya during that same trip which sparked criticism among locals. “I wish people would focus on what I do, not what I wear,” Melania said on the final day of her trip to Africa, which took her to Ghana, Malawi, Kenya and Egypt.

Lindsey Evans, the Glamhive Washington DC-based stylist, commented on Melania taking style tips from royals such as Princess Diana. She said: “I believe the common thread in these style choices speaks to the integrity of the brand and design houses.

“When a piece ‘works’ on multiple public figures and sells it’s because it’s a great piece, plain and simple. I believe Melania has always had great taste and isn’t taking inspiration from anyone.

READ MORE: Queen Elizabeth had ‘unique’ jewel she only loaned to two royals

“She knows a good thing when she sees it and has the best of the best to choose from – much like the Royal Family.” Stylist Melita Latham commented on how Melania’s style changed since becoming First Lady of the US.

The expert explained: “While Melania certainly didn’t dress extravagantly previously, she certainly had style. A flair for striking gowns with just enough coverage to be classy and scream look at my figure.”

Since becoming the First Lady, she “definitely lost her glam, now replaced by military garments,” the expert claimed. Melania used to wear daring and even sexy looks for public appearances before Donald Trump became president.

Describing Melania’s style, Melita said: “Thick coats, covered cleavage, high neckline, all the tributes of what you might find in the British Royal Family.”

Gianni Casagrande, digital marketing manager at Moda in Pelle, added: “We’ve seen a distinct change in Melania’s style since Trump was inaugurated in early 2017, though the transformation began much earlier.”

Since 2000, Melania’s fashion choices “have been moving away from a fun-loving party girl to a serious political figure, but still keeping to a few of her signature features”. For example, “form-fitting materials, bright colours and glamorous accessories”.

The expert added: “Melania is a fan of bold colours and tailoring, and isn’t afraid to stand out and wear something eye-catching.

“Melania’s style choices demonstrate that she isn’t someone happy to fade into the background and that she is confident in her position. She is not afraid to strike a balance between elegant and sexy, always pairing any outfit with smouldering eye make-up and glamorous waves.”