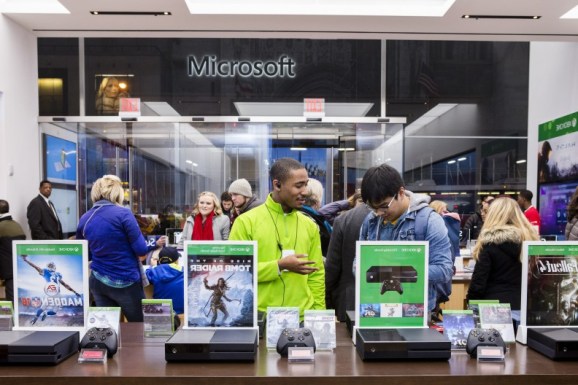 ‘Tis the season to claim victory.

Microsoft said this evening that it saw record sales of Xbox One game consoles and Xbox Store digital game sales during the week that included Black Friday.

The company attributed the gains to the popularity of its Xbox One consoles, the extensive line-up of exclusive games, console bundles, and the new backward-compatibility technology that allows Xbox 360 games to play on the newer Xbox one console.

Microsoft said that Xbox fans around the world spent a total of 325 million hours gaming on Xbox Live this past week. Those hours spent playing games on Xbox One last week were up 196 percent compared to Black Friday week in 2014, when there were fewer consoles in the market. The time spent using Xbox apps was up 321 percent.

Microsoft also said that Xbox Black Friday sales in the Xbox Store broke records with an increase of 57 percent across Xbox One and Xbox 360. The global Xbox Live Gold subscriptions were up over 40 percent, and U.S. Xbox One console sales at retail were up 22 percent over the same period last year, making it the second biggest Black Friday week in 15 years of Xbox history in the U.S., the company said.

No doubt Sony is also going to claim its own victories during the all-important holiday season, which is still in full swing.

Meanwhile, the Redmond software giant said that total paid unique users in the Xbox Store also broke records with an increase of 55 percent across Xbox One and Xbox 360 compared to Black Friday week last year, with 88 percent growth on Xbox One alone.

The Xbox One 500GB Gears of War: Ultimate Edition Bundle was the best-selling Xbox console bundle. The Xbox Elite Wireless Controller also saw high demand and was sold out at most major U.S. retailers since launch. Microsoft said it is working hard with retailers to replenish stock.

Gamers have logged more than 4 million hours playing Xbox 360 games on Xbox One since backward compatibility launched on Nov. 12. Microsoft also said that it hsa seen big Windows 10 gaming momentum, with hours spent gaming on Windows 10 exceeding Windows 8 for the first time during the month of November.

Since Windows 10 launched in July, gamers have streamed over 5 million hours of Xbox One game content to Windows 10 PCs. Fallout 4 was streamed the most frequently in November.

Last month, nearly 30 percent of all Steam players played on Windows 10; there were six times more gamers playing Steam on Windows 10 than OSX and Linux combined.