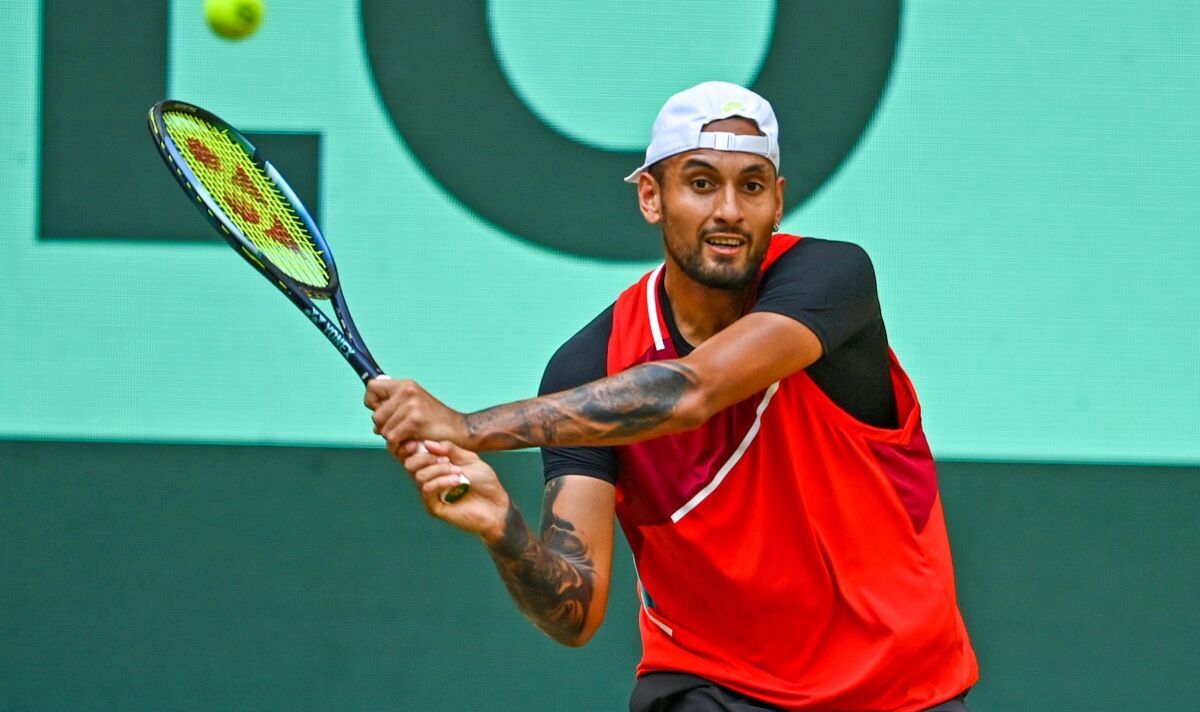 Nick Kyrgios has openly mocked Stefanos Tsitsipas on Twitter reigniting the long-running spat that exists between the pair. The pair have not always seen eye to eye especially since they were involved in a high-profile social media spat before the 2018 US Open.

The pair faced off at the Halle Open last week with the Australian coming from behind to win in three sets. The match was not without controversy after Kyrgios argued with the Umpire and smashed his racquet during the match.

The world no 45 has appeared to mock his Greek opponent in the aftermath of the match, responding to one of Tsitsipas’ tweets by openly laughing at him.

The 23-year-old original tweet read: “The human brain is quite amazing. It functions 24/7 from the day we are born, and only stops when you are taking a test or speaking to someone attractive.”

To which Kyrgios responded: “Hahaha this is hilarious.” While the Greek star’s tweet was a little bit bizarre for a professional sportsman – he will not take kindly to being publicly embarrassed by the Australian.

The spat could therefore reopen the existing underlying tension between the players that has existed since Kyrgios called out Tsitsipas before the US Open in 2018. The 27-year-old responded to a Twitter video of the Greek player walking around New York with the caption “Da fuq,” something he quickly deleted.

Tsitsipas was scathing in his response to the criticism hitting out against Kyrgios for his attitude and training habits.

“Everybody knows who Kyrgios is, let’s be honest,” the world no 6 said. “I know some people see these things I do as something weird, writing all these tweets that make no sense.

The pair have also argued with each other on Twitter over on-field coaching. Kyrgios came out against the on-field coaching in direct opposition to the Greek star who felt there should be no punishment for it. The Australian, who boasts a superior head to head record against his rival, took a thinly veiled swipe at their respective abilities at the time, claiming he managed to beat him without a coach. The Ozzie wrote: “Seemed to do fine without one against you my guy.”

However, tensions have sometimes mellowed between the pair. They have found themselves as doubles partners in some tournaments like in the Citi Open in 2019.

With the 2022 Wimbledon Championships getting underway next week the reignition of the rivalry between the pair provides another exciting sub-plot to the action at SW19.