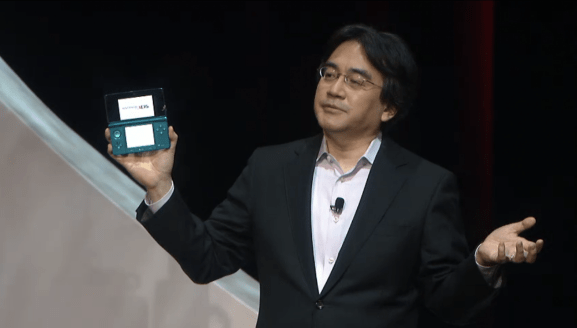 Gaming is in its golden age, and big and small players alike are maneuvering like kings and queens in A Game of Thrones. Register now for our GamesBeat 2015 event, Oct. 12-Oct.13, where we’ll explore strategies in the new world of gaming.

The man that has guided Nintendo as its president and chief executive officer since 2002 has passed away.

Satoru Iwata, who oversaw one of the biggest eras for the gaming publisher, died due to complications from a bile-duct growth on Saturday, according to a statement. He was 55. The top two executives at Nintendo are now senior managing directors Genyo Takeda and Shigeru Miyamoto.

As a Nintendo executive, Iwata is best known for spearheading the “blue ocean” strategy that had the company build products for people that didn’t consider themselves traditional gamers. That led to the Wii and DS systems, which were among some of the fastest selling and most popular consoles ever made.

Iwata took over the role of president and CEO in 2002 after his predeccessor, Hiroshi Yamauchi, retired. That was only two years after joining Nintendo in 2000.

But the Nintendo chief’s history with the company goes back a lot farther than that. He joined the game developer HAL Laboratory as a full-time software engineer in 1983 just after graduating. While working at that studio, he worked on beloved classics like EarthBound, Kirby, and Balloon Fight — all games that HAL worked hand-in-hand with Nintendo on.

He was highly regarded as a programmer while at HAL, and — in 1993 — he worked his way up to the position of president at that company. Under Iwata’s leadership, HAL continued its close relationship with Nintendo. When Yamauchi stepped down, the company obviously felt it knew what it had in Iwata after collaborating with him in one way or another for nearly two decades.

And what Nintendo had in Iwata was a man who understood the magic the company was renowned for creating. He encouraged both the hardware and software teams under him to think differently. And the evidence of that came in 2004 when the company released the Nintendo DS, the first system designed and released fully under Iwata. That dual-screen device stormed onto the market and succeeded by giving Nintendo a place to make great experiences for its fans while simultaneously introducing new franchises like Brain Age and NintenDogs that appealed more to older consumers or girls.

Iwata’s Nintendo followed up the DS with the equally different Wii. Instead of trying to compete with the Xbox 360 and PlayStation 3 in terms of power and HD visuals, the company went with a motion controller in an explicit effort to simplify the input method for people that found typicaly gaming joypads intimidating.

Nintendo sold more than 100 million Wiis and 154 million DSes, which makes it the best-selling handheld gaming console ever released.

In more recent years, Iwata has struggled to guide a Nintendo that is in a transition period. The company has lost many of the nontraditional gamers that flocked to the Wii and DS to iPads and iPhones. This has led to Wii U and 3DS devices that have not sold as well as their previous systems. But, despite that, Iwata has worked tirelessly to ensure Nintendo remains a profitable company.

But beyond making money, Iwata has also turned Nintendo into a company that is more conscious of its legacy and more in touch with its fans. In 2011, Iwata started hosting Nintendo Direct video events online that would reveal new games and more on YouTube and Twitch. This created a direct-to-consumer dialog that led to hugely successful live shows that the company started hosting at the Electronic Entertainment Expo event in 2013. Now, every company has its own events like those.

Nintendo will have a very difficult job replacing Iwata. It’s one thing to have a president who can spot business opportunities like the Wii and DS. It’s another to have one that can do so while maintaining and growing the key factors that make a company special in the first place. Iwata was the first Nintendo president that was not related to the Yamauchi family, but he still completely understood the soul and the DNA of why people love what the company makes in the first place. And he did everything he could to ensure that the company could go on making games like that forever. That’s what made him so important to Nintendo and to every gamer around the world.