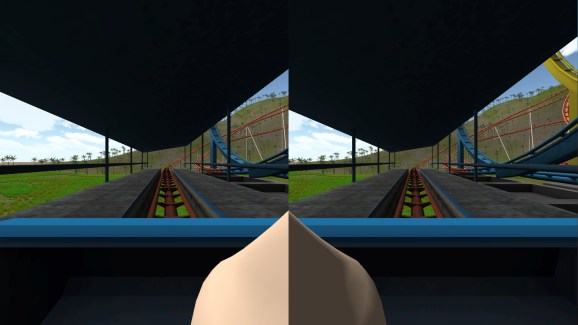 Virtual Reality is white-hot and rapidly growing, but it has still some problems to figure out, and one of the biggest is motion sickness. While improved motion-tracking and lower display latency have improved the situation in the past year, getting dizzy and disoriented while wearing a VR headset is still a common complaint heard at tech industry demonstrations (just ask our own Dean Takahashi). Purdue University’s Department of Computer Graphics Technology has found that adding a virtual nose to a VR scene can help reduce simulator sickness.

A virtual nose, or “nasal virtualis,” has the capability to lessen motion sickness in the same way that fixed visual reference objects such as a ship’s cockpit or a car’s dashboard might, the researchers say. They tested 41 subjects for sickness in varying virtual simulations (including a crazy roller-coaster sim), some with the virtual nose, and others without. In all tests, subjects were able to play longer without feeling sick, in what researchers called a clear trend.

Don’t worry about a big virtual schnoz getting in the way. In these tests, virtual nose or no, subjects never noticed one.

“Surprisingly, subjects did not notice the ‘nasum virtualis’ while they were playing the games, and they were incredulous when its presence was revealed to them later in debriefings,” said David Whittinghill, an assistant professor at Purdue’s computer graphics department.

The researchers suspect that because people are used to tuning their noses out, it’s not obvious to these subjects. But the sensory system still knows it’s there.

Research is still being conducted but it’s not clear why the virtual nose reduces motion sickness. The group has a long-term goal of creating a predictive model for motion sickness, allowing them to predict how sick users will get.