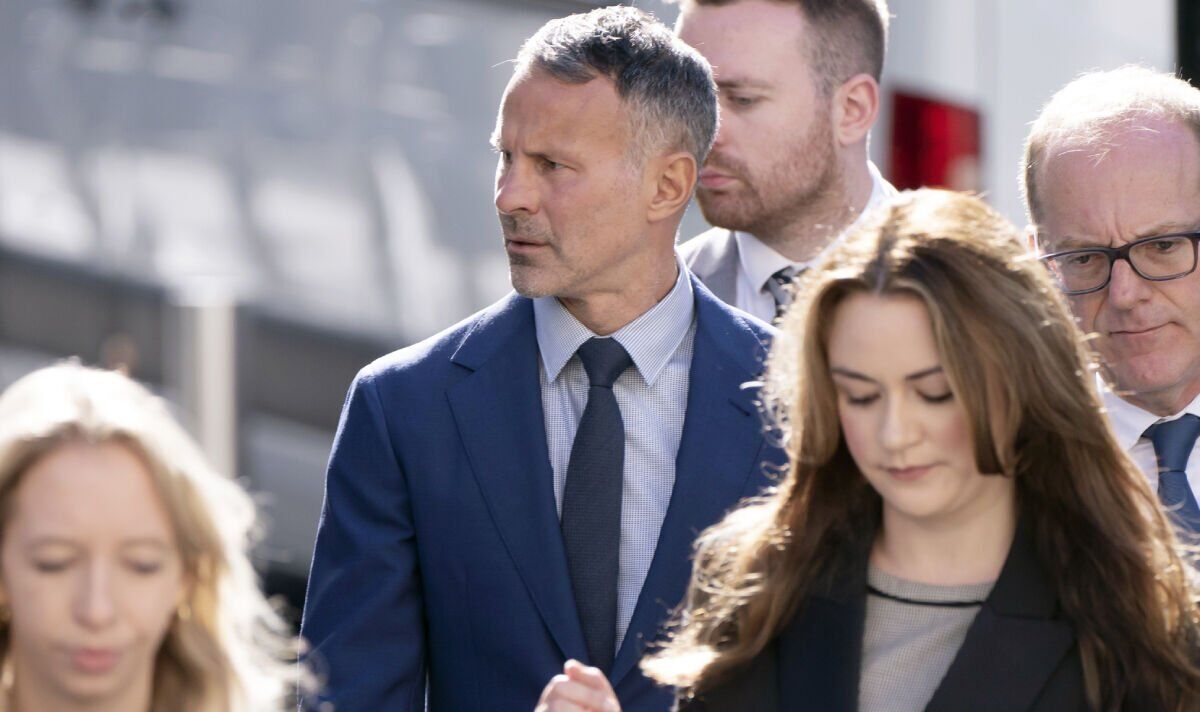 Ryan Giggs arrives at court for day five of his trial

Footage from the night Ryan Giggs is alleged to have headbutted his ex Kate Greville was played to jurors in full on Friday, revealing who made the 999 call and what the footballer told police. The 48-year-old is accused of headbutting Ms Greville during an alleged argument at their home in Worsley, Greater Manchester on November 1, 2020.

Ms Greville, 37, has also accused Giggs of elbowing her younger sister in the jaw when she tried to pull the former Wales manager off of her. Giggs is also accused of coercive and controlling behaviour towards Ms Greville during their six-year relationship. Giggs denies all charges.

Jurors at Manchester Crown Court were played two 999 calls made by Ms Greville’s sister on the night of the alleged headbutting, as well as CCTV footage from outside the couple’s home and body-worn footage of Giggs speaking to a police officer.

Giggs, won 64 caps for Wales and 13 Premier League titles, two Champions League trophies, four FA Cups and three League Cups during his time at Manchester United. He is also a co-owner of League Two side Salford City and the ex-manager of Wales.

1) Kate ‘screamed in pain’ after the alleged headbutting

In the recording of a 999 call, played to the jury, Ms Greville’s sister Emma asks the police to “come quickly” while Ms Greville can be heard crying in the background.

The operator asks: “Does she need an ambulance, that lady who is screaming in the background?”

Emma Greville replies: “Yes I think so. He has just headbutted her in the face.”

No mention was made in court about whether an ambulance was ever sent to the house.

Emma Greville is then heard to say: “What? Ryan, I am saying anything I want to f****** say. You have headbutted my sister.

The operator later asks: “OK, why is she screaming? Why?” and Emma replies: “Because she is in so much pain.”

In a second 999 call, Emma is asked to confirm the name of the person who has allegedly assaulted her sister, to which she replies: “Ryan Giggs, the footballer Ryan Giggs.”

The operator then replies “As in the Ryan Giggs?” and Emma responds: “Yes.”

Emma then adds: “He’s outside, he’s going to go. He’s here but the police aren’t here. He’s back now, can you come quick please?

“He said he’s going to headbutt me quite soon… He’s coming back.”

A statement from one of the officers arriving on the alleged headbutt scene was read to the court by prosecutor Peter Wright QC.

PC Howarth said in the statement: “Information was passed that the offender was Ryan Giggs and he had headbutted his partner. The informant that contacted the police was the victim’s sister and we attended on blue light response and arrived at the address at 10.20pm.

“Waiting outside of the address was the informant who I now know as Emma Greville. As I started speaking to Emma Greville I activated my body-worn video which was exhibited.

“Emma walked myself and PC Billington into the plot which contained three houses and the front door was open. I walked closer and could hear voices inside. The defendant who I now know as Ryan Giggs was at the door. I would describe him as a white male, wearing a white long sleeve shirt, grey suit pants and black shoes.

“I could see he had blood around his mouth,” he told the court.

In body-worn footage played to the court, another officer can be heard speaking to Giggs about his bloodied mouth.

Giggs told PC Billington: “We struggled on the floor and she’s kicked me in the head, bust my lip.”

Ms Greville told jurors earlier this week that one of her fingernails “caught in Giggs’ mouth” as she tried to fight him off as he allegedly “pinned her down” to the floor.

4) Giggs was concerned about the couple’s puppy

Jurors previously heard the couple had recently bought a puppy and Ms Greville wanted to take him with her when she split with Giggs.

In body-worn footage from the night of November 1, Giggs tells an officer that the cocker spaniel pup was “his dog” and that Ms Greville wanted to take her with him after the argument.

He tells PC Billington: “t’s a cocker spaniel. I love him just as much as Kate, Kate wanted to take him. He’s my dog.”

After he is arrested and read the police caution, Giggs asks the officer: “With the puppy, is the puppy going to stay here?”

During the second 999 call played to the court, Giggs can be heard in the background saying: “Kate, all I wanted was my phone, now we will be … thanks Emma.”

Emma then says to Giggs: “No, you said you called the police already. You told me.”

Giggs can then be heard saying: “All losers.”

Emma Greville replies: “Yeah, we are all losers? All losers, yes. What are you waiting for? Just go away.”