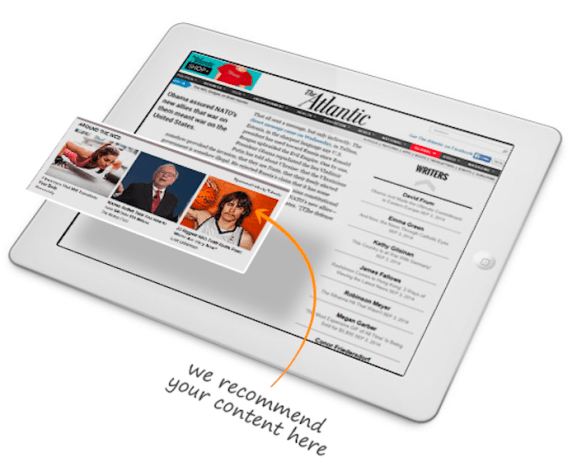 Successful CMOs achieve growth by leveraging technology. Join us for GrowthBeat Summit on June 1-2 in Boston, where we’ll discuss how to merge creativity with technology to drive growth. Space is limited. Request your personal invitation here!

Taboola CEO and founder Adam Singolda, who told me that the new strategic partnership is “bringing content discovery as a new advertising category to China,” declined to specify the amount of the investment. He noted this was Baidu’s fourth investment in a U.S. company, following alternative ride provider Uber, indoor positioning service Indoor Atlas, and the acquisition of mobile security firm TrustGo Mobile.

The New York City-based company offers “around the Web” suggestions of related stories at the end of articles, and its marketplace allows publishers to bid on distributing their content.

VentureBeat is studying personalization in marketing…
Chime in, and we’ll share the data with you.

Although he did not provide details on what the implementation in China might look like or the pace of the rollout, Singolda said it could be adapted to the cultural climate.

It remains to be seen whether Taboola has to tailor its content recommendations for the Chinese authorities, who banned Google based in part on that search giant’s not providing access to information on dissidents’ activities. The Google ban has helped paved the way for Baidu’s rise.

Singolda did say that the deal “dovetails with something similar” in Japan: Taboola’s Yahoo Japan strategic partnership announced last summer that offers a new Yahoo Content Discovery service to Yahoo News partner publisher sites in that country. But, he noted, that collaboration in Japan is still emerging as its rollout continues.

The new funding comes on top of Taboola’s announcement in February of a $ 117 million series E round, which brought its total raised thus far to $ 157 million. Last August, it purchased programmatic ad startup Perfect Market to automate the display of ads with content recommendations.

These steps are consistent with a vision that Singolda has painted, where Taboola’s content discovery evolves in a variety of directions.

He has cited content discovery as part of the advertising trend toward connected storytelling, for instance, and has expressed interest in Taboola versions that focus on specific industries like food or travel.

Search and content discovery would also appear to be natural allies in satisfying the user’s interests, the former by deliberate queries and the latter by intelligent suggestions that can accompany search results.

Founded in 2007, Taboola reports that its annual revenue has ballooned from under $ 10 million in 2012 to over $ 200 million last year. It claims to currently serve over 200 billion monthly content recommendations for more than half a billion users in the U.S., Europe, Thailand, India, Japan, and Israel.

Singolda told me his company’s key differentiator against competitors, which include Gravity and Outbrain (VentureBeat uses Outbrain), is the scale at which it operates.

ComScore reported last fall that Taboola reaches more U.S. desktop users than Facebook, Google’s sites, Yahoo, Outbrain, and AOL. The company intends to keep its scale advantage, boasting that it has about a hundred mathematicians and engineers dedicated to finding the next generation of discovery personalization.