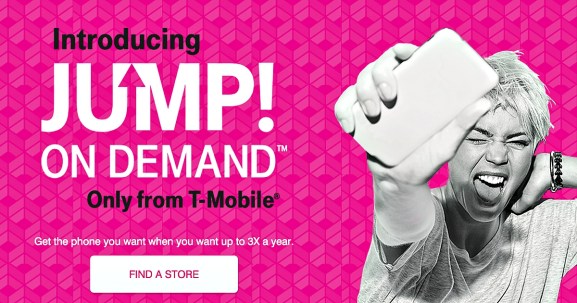 With Apple announcing its new leasing — or “financing” — program at its iPhone 6s launch event earlier this month, it seems that T-Mobile doesn’t want to be left behind.

The U.S. carrier’s social-media-savvy boss, John Legere, took to Twitter late Tuesday to announce that T-Mobile customers will be able to trade in their current iPhone 6 or iPhone 5s models for a shiny new iPhone 6s.

Prices will range from $ 5 to $ 15 per month depending on the model, with the deal available via T-Mobile’s JUMP! On Demand upgrade program.

Right now, Legere says that T-Mobile is the only U.S. carrier offering discounts on the iPhone 6s at launch.

We reported Monday that Samsung is also supposedly planning its own Apple-style leasing program for its premium Galaxy smartphones — further evidence of a major shift underway that could spell bad news for carriers’ traditional business models.

Legere is not one to accept the status quo, so this move under his leadership is perhaps not too surprising. He’s also known for his fiery tweet storms about U.S. carriers.

T-Mobile will start selling the new iPhone 6s models Friday, with Apple announcing earlier this week that users are adopting iOS 9 faster than any previous version.

8/ Want to own your iPhone? OK. You’re still getting the best deal from us. We’re the ONLY wireless co. offering the #iPhone6s at a discount

10/ AND don’t forget with #JUMPonDemand you can upgrade 3X/year! Will share more details tmrw, but had to tell you about this deal ASAP! 🙂