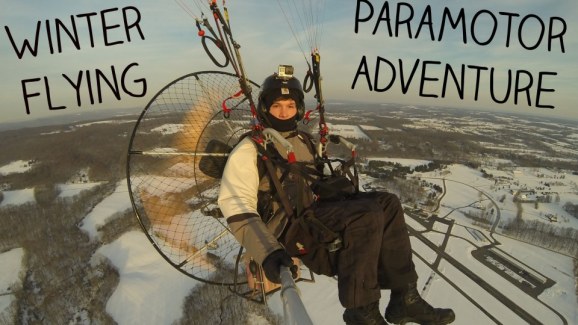 Humans have always wanted to fly, and while we’ve technical achieved the feat in the last century, we still yearn for what many consider the ultimate feeling of freedom.

The generic term “paramotor” refers to the propulsive portion of a powered paraglider (or PPG). The sport of “paramotoring” is thus powered paragliding: you’re still technically gliding, but you’re not just relying on wind currents and drafts.

YouTube user Tucker Gott went paramotoring this past winter. This week, he finally got around to editing this breathtaking video (note: the audio is NSFW courtesy of Ludacris):

According to Gott’s Facebook page, he has been flying for just over a year and a half. He noted the cold “sucks” but clearly it’s a small price to pay for the rush.

There isn’t a lot of information about this particular video, but Gott did take the time to answer a few questions on the corresponding YouTube page. One commenter asked how he keeps track of how much gas is left, to which Gott replied:

I know that I burn about a gallon an hour and I have a 3 gallon tank. If I’m planning on going for a normal hour long flight, I’ll put in 1.5-2 gallons. That way I know I have enough but it’s not as heavy as if I filled the tank. I also have a small mirror in a side pocket so I can see the fuel tank behind me.

Right. And if he happens to drop that mirror, he can always fly over and land at a gas station.